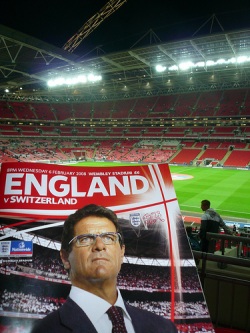 People who hate to see technology in soccer, rejoice! England manager Fabio Capello has delayed the launch of the so-called Capello Index, a Web site that would have tracked various statistical measures of England players. It was to have started with the World Cup next month and continue into the Premier League season, but the whole project has been shelved for the time being.

It looks like the site was to have been publicly accessible in some capacity, something that seems to have upset some of the members of the old guard. “How dare the coach make such information public, blah blah blah!”

Meanwhile, Brazil, instead of criticizing their team to death, as so often happens with England, is rallying round the flag, so to speak, with coach Carlos Dunga set to announce his provisional 30-man squad.

The software was to “track and rate the performance of players during matches,” which doesn’t sound too different from ProZone (or Football Manager!). I suppose the idea of making player reports publicly available is sorta odd, but it’s not like we can’t see the games for ourselves, you know?

You’re damn right if you think these next few weeks will be filled with stories about soccer and technology. Try to stop me!