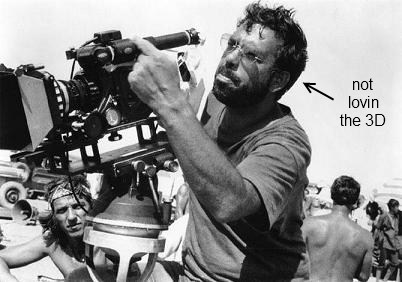 I don’t blame established directors for questioning the worth of 3D. I just wish they would object based on personal and not technical scruples. Ebert had a few of both, and I addressed the technical ones. Coppola says he agrees with Ebert, though mainly he just doesn’t feel today’s 3D differentiates itself much from the film 3D of the past. Conceptually, I think he’s right — but the workflow for 3D is becoming so much easier that creativity within a 3D filmmaking environment is taking off. And once the glasses are either comfortable or no longer necessary, where’s the objection?

As I said in my response to Ebert’s broadside against 3D, I think there’s still a long way to go, and yes, some of it has to do with money. Of course, if moviemakers could make the money they’re making today on soundless black-and-white 8mm film, we’d still be watching movies like those from the ’20s. Technical advancements may be initiated by a desire to differentiate and make some money, but they’re technical advancements nonetheless.

I don’t like how they pretty much misquote him, though. He says the glasses are tiresome, not 3D cinema in general.