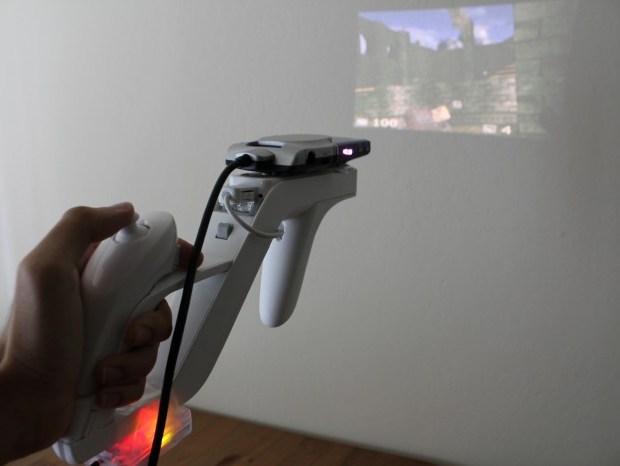 You guys probably remember the Game Gun, a projector-or-tiny-LCD-equipped gun-shaped controller packed with accelerometers, essentially making a sort of home virtual reality experience. At CES I found that the dogs were nipping at the Redneck Techie’s heels, in the form of Microvision’s ShowWX gun prototype. And now you can just make your own! Well, you’ll need a Wii Zapper, Wiimote, nunchuk, and one of the aforementioned ShowWX projectors, but still.

Basically it just uses some open source position-tracking software called SpacePoint Fusion, although at the moment it’s only playing a hacked version of open source FPS Cube and the setup is a bit bulky. The ShowWX gun controller, if I remember correctly, should be plug-and-play with most games, since it outputs mouse emulation in the end.

Whether these will catch on at all depends on a lot of things, but I can tell you that it was extremely fun to play with Microvision’s version, and playing something like Alan Wake with one would likely be a very intense experience. We’ll keep you informed on any new, cool stuff along these lines.