Online video streaming is great. But when it comes to zoning out in front of a flashing screen to kill a few hours, TV has it beat by a long shot — building an interesting playlist of YouTube videos simply requires too much effort. Nowmov, a Y Combinator startup that’s launching today, is looking to change that: visit the site, and you’ll find an endless stream of (hopefully) compelling YouTube clips — no brainpower required. The site has already built up an impressive roster of angel investors, including Jeff Clavier, Paul Buchheit, Shervin Pishevar, Ron Conway, Charles River Ventures, and Ashton Kutcher.

Nowmov’s site is very, very simple, at least from the user’s perspective. As soon as you browse to Nowmov.com, the site will begin playing a YouTube video. Move your mouse and you’ll see a basic set of controls that let you pause the video, jump to the next clip, and share the video you’re watching with friends (the site supports keyboard commands, so you can just tap your arrow keys to jump between clips). But for the most part, you shouldn’t really need these controls — the whole point of Nowmov is that you can lay back as if you were watching TV, without having to figure out what you want to watch next. Nowmov uses some trickery on the frontend to reduce loading times, so even when you do decide to skip to the next clip there isn’t a jarring pause.

Nowmov decides which videos to play by analyzing the Twitter public timeline and looking for commonly shared YouTube links (in the future, the site plans to use other sources to gauge popularity, and will also draw video from sites other than YouTube). For now the site isn’t doing any personalized recommendations — it constantly updates its playlist and uses cookies to ensure that you don’t see the same clip twice, but there isn’t an algorithm that learns which videos you like. That will change in a future version, when the site plans to produce personalized channels of content (think of it as a Pandora for videos).

The team has quite a bit of experience with video.  Two of the company’s co-founders  — Thomas Pun and James Black — were longtime Apple engineers working on video encoding and processing; the third, David Kelso, was a technical founder at two startups before this.

There’s definitely a need for this, but Nowmov isn’t the first startup that’s trying to solve it. ffwd has also tried to turn Internet video into a channel-surfing experience, and Magma is focused on video curation, though it isn’t really a  ‘lean-back’ site. And YouTube is always trying to bolster its own recommendation algorithms to keep people watching.

Interesting sidenote: Ashton Kutcher is actually directly responsible for this site existing; the Nowmov guys were considering working on another idea until Kutcher told Y Combinator founders Paul Graham and Jessica Livingston that he wanted something like this. Kutcher decided to invest in and advise the startup, and Nowmov became a reality. 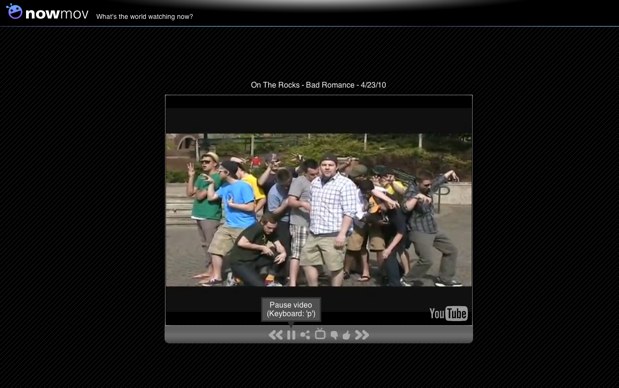