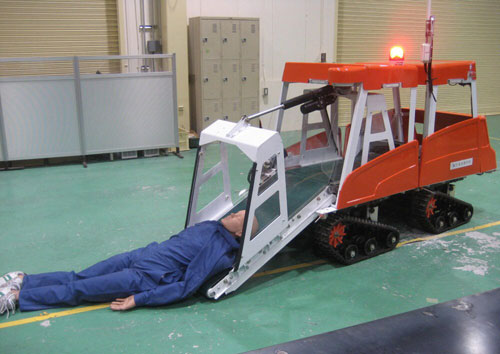 This looks much like a robot that actually serves a purpose. Japan-based tool maker Kikuchi has developed a robo vehicle that can pull victims at disaster sites into its body. The obvious goal is to support human rescuers for whom it’s too dangerous to reach injured people during certain emergency situations.

Kikuchi says the robot can be used during chemical, biological, radiological, or nuclear disasters. It pulls victims inside its body via a conveyor belt and can then be driven to a safe area via remote control. The robot can rotate 360 degrees within a 1.5m radius, which makes it possible to use it in narrow spaces. According to Kikuchi, the robot can ascend slopes with an angle of up to 30 degrees.

The company has already started offering the rescue robot for $110,000, hoping to sell 10 units per year. Buyers can also get night vision cameras and other add-ons on request. There are similar emergency robots out there already, for example the “Robocue” we blogged about last year (that one is made by the same company).

I tried hard to dig up a video for your viewing pleasure, but it appears there’s nothing out yet (Kikuchi doesn’t even mention the robot on its own Japanese website yet).