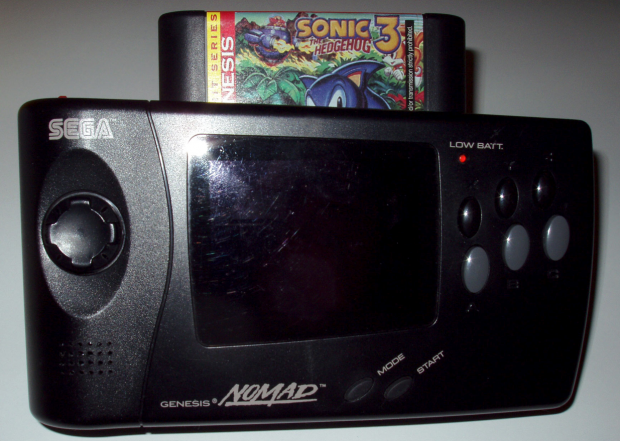 I was always a Sega kid. Not exclusively, mind you — I never saw fit to swear my loyalty to plumber nor hedgehog. Still, I was always that kid. The one who swore that Lion King was better on the Genesis than it was on the SNES, even if the former did sort of look like over-dithered garbage. The one who told all his friends how awesome the Sega Mega Mouse would be, even when there wasn’t really any reason for it to exist. The one who waited in line for a Sega CD.

When they announced the Sega Nomad — a handheld, battery-powered Sega Genesis — I just about flipped my lid.

The year was 1995, and handheld gaming was in a state of stagnancy. The best on-the-go system the world had seen thus far, the Gameboy, was coming up on its 6th year of life and offered up a color palette ranging from “Grey” to “Sort-of-greenish-grey”. Its successor, the Gameboy Color, was still 3 years off. In a flash that came years ahead of its time, the Nomad was born.

The Nomad did everything that other one didn’t. The screen displayed color (eighty different colors at one time, no less!) in a time when such a feat was tiptoeing the edge of sorcery. It had a backlight, allowing me to play — get this — in the dark. And the bit that I still find awesome to this day: it ran the same cartridges as its not-so-portable home-based brethren, the Genesis.

Alas, it failed pretty miserably, and not without reason. 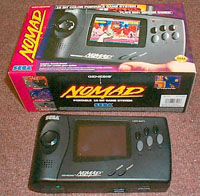 While this thing could be called “portable” in 1995, it was challenging the definition of the word even then. In less nice terms, this thing was as big as a friggin’ house. Tie a string to it, and it made for a perfectly suitable weapon. Sega could have donated all of the left over Nomads to charity, who could have in turn built orphanages using these things as bricks.

Worse than its size, and by far the issue that killed the entire concept, was the battery life. Now remember: this was 1995. Cheap, rechargeable lithium ion batteries strong enough to power a 7.67Mhz (Yep, Mhz. Seven of them.) processor and a 3″ display? Yeah right, space man. This thing demanded no less than six AA batteries at a time, and it chewed through them like a kid tearing into his first halloween candy. The “Low Battery” LED was more of an indication as to whether or not the thing was turned on.

It was by no means without its faults, but I loved it all the same. And to the kid who “accidentally” knocked my Nomad off the table and shattered the screen back in Elementary school: I still think you’re an asshole.