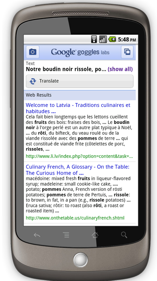 When Google first announced the Goggles feature last year, we thought the product could be huge leap forward in the field of visual search. Goggles allows you to you point your phone;s camera at something and Google figures out what it is. At the Mobile World Congress earlier this year, Google showed off the translation capabilities of the visual application in German. Today, the search giant is officially launching translation capabilities in the new version of of Google Goggles for the English, French, Italian, German and Spanish languages.

With the translation feature of Goggles, you can point your phone at a word or phrase and draw a box around specific words that you don’t understand. After pressing the shutter button, Goggles will give you the option of translating the text to the available languages. While the feature only includes five languages, Google’s goal is to eventually be able to to read all of the Latin languages and non-Latin languages (such as Chinese, Hindi and Arabic) as well.

In addition to translation, the new version of Goggles includes improved barcode recognition, recognition of many more products, artwork and logos, an improved user interface, and the ability to begin visual searches using images in your phone’s photo gallery.

The feature seems like it would be useful for any traveler. But sorry iPhone and BlackBerry users, Google Goggles v1.1 is only available on devices running Android 1.6 and higher.