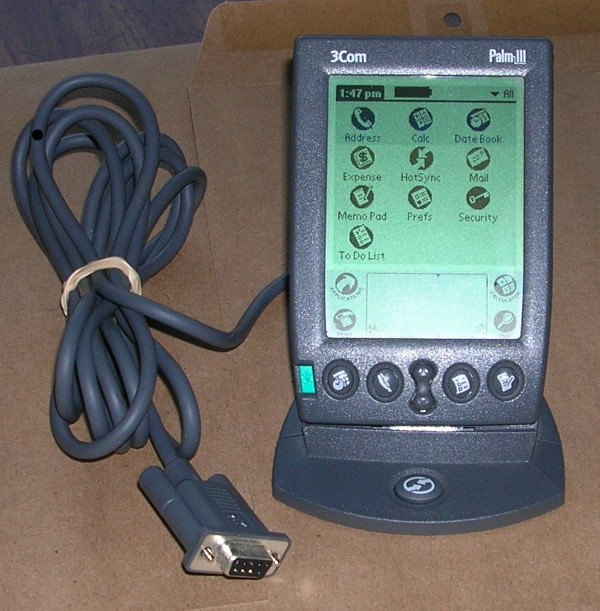 The Palm III was the first truly portable computing device I ever owned. Oh sure, I had a laptop at the time, but it was hardly something that could be considered “portable” in anything but the most liberal interpretation of that word. The Palm III, though, slipped in my pocket, and went everywhere with me. Its clamshell design gave it its own protective case for the screen, so I didn’t need to invest in fancy third-party protective gear. The Palm III traveled with me pretty much around the world, and it never let me down.

I honestly don’t think I can ever recall my Palm III crashing. It never fouled up any of the data that I put into it. And it always gave me back whatever it was I put in. It was a rock solid platform, and it quickly became an integral part of my productivity. In the days before cell phone ubiquity, the Palm III was my warehouse of contact information, and without it I was unable to contact some people because I didn’t memorize their phone numbers. Someone recently described Evernote as “my connected brain”, and I knew instantly what they meant, because for me, that was my Palm III. Contacts, notes, calendar events: the Palm III was my connected brain.

I didn’t spend a lot of money on apps, instead using those free apps that I could find. I don’t recall any apps ever crashing. Apps loaded lickety split, and just worked.

Backing up data was a breeze. The Palm Desktop wasn’t a beauty queen, but it got the job done. And the pilot-link project allowed me to back up and restore my Palm once I had moved to Linux as my operating system of choice. (JPilot was another extremely useful program on which I relied.)

It’s been a long time since I’ve used a Palm device — my Palm III was officially retired more than a decade ago — but in the time since I’ve yet to find anything nearly as useful as the infrared beaming supported by Palm. It was so easy to share contact information — my own, or anyone else’s — with other Palm users by simply beaming the data across. Sharing applications worked the same way. I miss that convenience every time I have to manually type in someone’s contact information onto my phone.