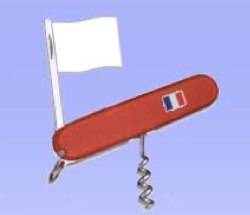 Everybody knows that the shortest joke in the world is “French Resistance.” I always thought that joke was pretty funny, because most jokes become funnier when you add “French” or “France” to them – “Going to war without France is like going deer hunting without an accordion. All you do is leave behind a lot of noisy baggage,” etc.

“Military Intelligence” is certainly a funny shortest joke, but “French Resistance” is just so much more complicated and nuanced. And therefore funnier.

But it turns out that “French Resistance” probably isn’t that funny. When I look at Microsoft’s description of the four proficiency levels of humor, jokes about the French military are clearly a problem. My joke uses humor to “criticize others and veil an attack,” “delivers sarcasm or cynicism” and “may be perceived as immature or lacking in appropriate seriousness.”

In fact, “French Resistance” pretty much violates all the “overdoing humor” guidelines. Which sucks.

But what is undeniably fucking hilarious is Microsoft trying to break down humor into a handy table with four levels of proficiency so that people can learn to be funny and use that skill in the workplace. 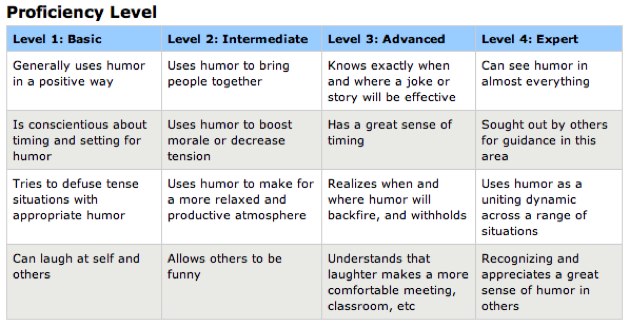 I found all of this pretty entertaining. And, yes, humorous.

Knowing that some people are more easily offended than I, could my use of humor put people off? Is there a chance I’m offending people but I’m unaware of it?

And if you read the humor page first, it kind of puts the rest of the competencies into perspective. What is it exactly? It’s a competency skills list for schools, based on Microsoft’s actual management techniques.

Most of this stuff can’t be taught or learned, but it is the kind of thing that big companies spend endless amounts of time teaching to mid level managers. If you want to be a mid level manager, try your best to get to a level four competency in at least half of these. That should keep you occupied and docile while your “ready, fire, aim” colleagues shoot up the corporate ladder.

This is the stuff of Dilbert.