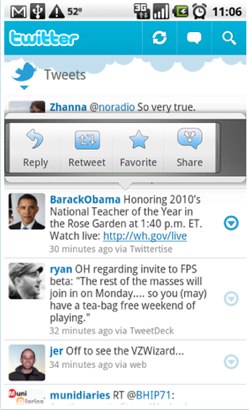 Earlier today Twitter released its official Twitter app for Android — a move that’s been expected since CEO Ev Williams announced that it was coming during Twitter’s Chirp conference. In our post, we mentioned that this was only going to be available for Android 2.1, and as others have pointed out, that means we have another case of Android’s lingering fragmentation problem rearing its ugly head. But just how bad is it? We don’t have to guess.

Two weeks ago, Google updated the Platform Versions section of the official Android website, which gives the most accurate breakdown of Android fragmentation you’re going to find — it looks at how many devices running each version of the OS have accessed the official Android Market. At the time 27.3% of devices were running 2.1; 2.7% were running 2.0.1, and nearly 70% of the devices being used were on either Android 1.5 or 1.6.

Google hadn’t updated the page in four months (this is the first update since the Nexus One was released). It’s pretty clear that it was waiting for the rollout of Android 2.1 to the Motorola Droid, which took place in early April.

Obviously the majority of phones won’t be able to use the Twitter app, nor can they access the newer features Google has been rolling out with the upgraded versions of Android. Google isn’t fully to blame for this — some phone manufacturers are running custom builds of Android and are slow to upgrade (or simply don’t intend to). But developers will be looking to Google to find a way to deal with the fragmentation issue. My hunch is that things will get better at Google I/O next month, when we can expect plenty of Android-related announcements.