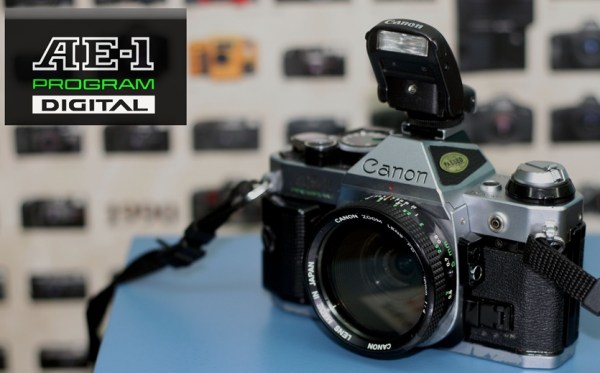 Greatest thing of all time? It’s at least in the running. Some very dedicated Canon lover (and DIYer) has put the guts from a modern Canon digital into the a hollowed-out AE-1, one of the wonderful old metal bodies from the early 80s. I learned to shoot on its elder sibling, the FTb, and I still love to just hold it my hands as a reminder of how things were once built. If only I could have both… like this thing.


It seems that pretty much all the dials have been replaced with the digital ones (otherwise you wouldn’t be able to operate the camera), and there’s a d-pad looking rather out of place on the back. I love that the film advance, wind, and ASA knobs are still there. I mean, why take them off? Woah, and take a look at that lens, what the hell?! 10mm F/1.4 pancake? WANT.

The video says it has 9 megapixels, but what model he might have cannibalized to create this thing isn’t coming to mind. Some point and shoot from around two years back, I’d guess… but from the d-pad styling it doesn’t look like a G-series (update: Looks like a Powershot SD870 or something like it).

This thing is cool as hell and I want it so bad. More pictures over at the DP Review forums.