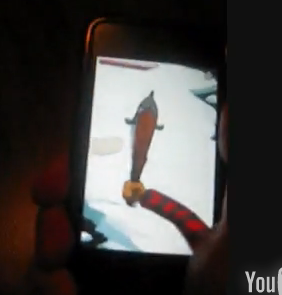 iSealClub is the latest app to be rejected from the App Store. In it, you yes, club seals. I’m shocked — shocked! — that Apple would reject such an app.

So I decided to develop a game based on the seal hunt (with a club). You play a seal hunter armed with a club against an unlimited number of seals. Tilting the device in the desired direction moves the club around the screen, and making a flicking motion causes the club to hit a seal or the ground. I tired to keep the game light hearted as possible with no blood, or clubbing baby seals. Well… you can try and club the baby seals, but you lose points and they just take off really fast.

Smyth emailed Apple before ever writing the app to see if they would find it questionable, and they responded that they didn’t pre-approve apps. So Smyth built it. And yes, it was rejected on the grounds that it contains “content or materials of any kind (text, graphics, images, photographs, sounds, etc.) that in Apple’s reasonable judgement may be found objectionable.”

Actually, I thought the whole thing was a joke when Smyth emailed it to us, but it turns out his app is actually based on something real: the Canadian Seal Hunt. Yes, it’s real — and awful.

But actually, Smyth has something of a point with the following:

I looked at other apps in the app store which have been approved.

Here are a few examples of games available on the app store:

The Canadian Seal Hunt may be controversial, but it is in-fact sanctioned (unlike stealing cars and shooting cops) by the Canadian government.  People also make a living from the seal hunt (ie not a “sport” hunts).   The game itself rewards the player with seal based products (such as seal oil, or seal skin jackets), and not “trophies.”

Given the “objectionableness” of the game’s content compared to the above games, I can’t help but think that Apple has taken a less then neutral position on the topic of the Seal Hunt.  If Apple is truly against the seal hunt, I respect that.  I wouldn’t kill an animal (non-virtual of course) myself.   But… I don’t respect Apple for restricting content based these views(when the other side is still socially acceptable).  I can understand not allowing games with the cold blooded murder of police officers….. oh wait…. They do..   never mind.

A very interesting point. That said, I’d say there’s just about no way this app gets accepted, hypocrisy or not. So you’ll just have to make do with the video of it in action below.