I sat down with Redfin CEO Glenn Kelman and investor/board member James Slavet to talk about the continued success of the Seattle-based company. Warning in advance – the interview was done at the end of the day and we were drinking beer from our new kegerator, and we rambled at times. Perfect for a Sunday afternoon viewing, in my opinion.

Kelman announced in the video that Redfin is now on a $30 million revenue run rate, up from $15 million last summer (and at that point they were profitable. 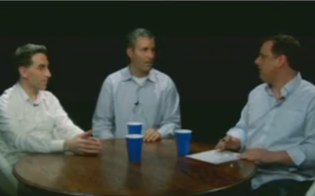 The company cuts real estate fees dramatically, by about half, for both buyers and sellers. Kelman called real estate “by far the most screwed up industry in America” on 60 Minutes a couple of years ago, But Kelman has cooled somewhat since then, and some of the death threats and hostility by realtors has now calmed down, he says.

We also brought up the age-old Seattle v. Silicon Valley debate again – something we’ve been arguing about since 2008. And we touched on his recent guest post about the need for founders to share the love with employees when it comes to distributing equity.

Side note: Slavet was also in our studio recently to talk about his investment in TellApart.