http://c.brightcove.com/services/viewer/federated_f9/1875385286?isVid=1
One of the issues that comes up in touchscreen user interfaces is that, well, you have to touch them. Sure, you can move your finger, or use two, or tap it twice, that sort of thing — but you’re either touching it or not. Essentially you only have one type of “click” any given input can do. Hover detection is something Wacom tablet users will be familiar with, as the type of detection used by their pads is a different kind, in fact designed around the idea of the hover and touch as separate input elements. But on smartphones, not so much. 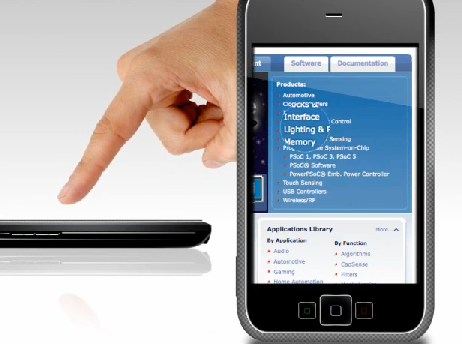 Cypress’s newest TrueTouch touchscreen, conveniently smartphone-sized, detects hovering like a champ. About a quarter of an inch from the screen, a finger can be detected, and to some extent its distance can be determined. This could be the beginning of something very interesting.

The trouble is, of course, how to handle this new and foreign input? That’s what she said, by the way. But seriously. Hovering over things is a naturally passive behavior for us, since we’ve learned on our phones and other devices that it doesn’t really do anything. I don’t want to get into all the UI implications here, though I might at a future date, but if this technology is adopted (it’d be a strong point against the iPad in a competing tablet), it’ll be fun to see how it gets taken advantage of.