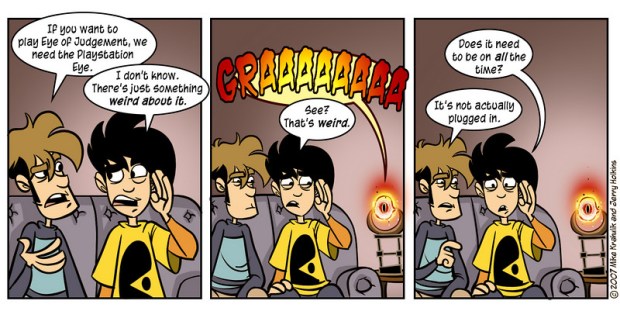 This is interesting. While checking up on the implications of Sony’s removal of the “Install Other OS” option, Thinq ran into a particularly troubling clause in the EULA.

Some services may be provided automatically without notice when you are online, and others may be available to you through SCE’s online network or authorized channels. Without limitation, services may include the provision of the latest update or download of new release that may include security patches, new technology or revised settings and features which may prevent access to unauthorized or pirated content, or use of unauthorized hardware or software in connection with the PS3™ system.

While I might have at first considered it boilerplate to say that they may provide matchmaking services and trophy tracking without your express consent every time, that second bit does go out of its way to say “no, this is about us keeping the PS3 in Sony-approved condition.”

I actually glanced over this EULA when I was researching that User’s Manifesto post. I ended up using Apple’s EULA as a sample, but as it turns out, the Sony one might have been even better. The language says, without exaggeration, that they may change settings and shut off access to your own software and hardware, without asking and without notification.

Do you like the sound of that? I doubt it. But you did agree to those terms. Luckily, it seems Sony hasn’t felt the need to exert this power yet, seeing as the clause above has been in the PS3 EULA since launch and we haven’t heard of anything as nauseating as the Amazon thing. Cold comfort that.

It really just amounts to something a PS3 hacker needs to account for (find the method by which automatic updates occur; block it), but it sends a chill up your spine, doesn’t it — what’s next, remote access of the Eye to check if you’re not having enough fun? Quick! Check the EULA!