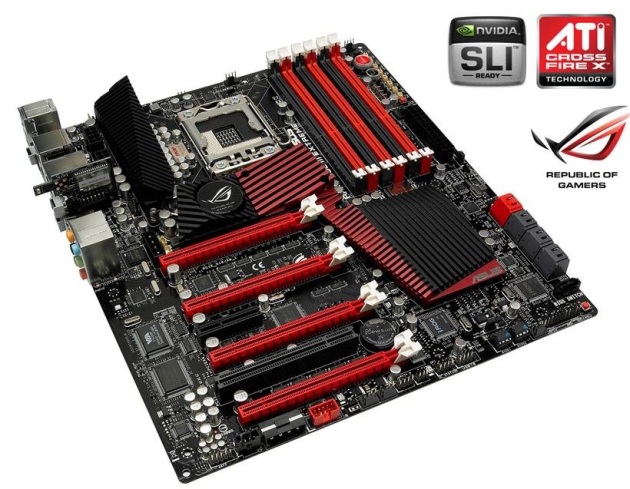 This is the greatest motherboard that has ever lived. It’s the Asus Rampage III Extreme, and it’s designed for people who do insane things like run three video cards simultaneously alongside an Intel Extreme Edition processor. People need to run Metro 2033 (and, soon, Crysis 2) at 200 frames per second. Origin is the first enthusiast builder to offer the motherboard.

My guess is that someone who’d buy an Asus Rampage III Extreme (which retails for $379.99 on NewEgg) would be comfortable with building a PC from scratch, but not everyone has all day to research memory timings and the like—maybe you have a nice bonus coming your way from work and simply want a new PC without having to know a damn thing about it? “I want the fastest computer money can buy, do whatever you have to do to get me there.”

That’s what I’d do if I were an investment banker or highly paid athlete. I am, in fact, neither.

Back to the motherboard—it has everything. Try USB 3.0, SATA III, 3-Way SLI or CrossFire (for Nvidia and ATI GPUs, respectively), and plenty of overclocking options.

I do believe it is the absolute top-of-the-line motherboard available.

The 3-Way SLI or CrossFire is most intriguing to me. My current motherboard, some mid-end Asus, technically supports CrossFire, but only at 1/4 of the maximum memory bandwidth. Why bother? Plus, it’s be an awfully tight fit trying to get two beefy video cards in there. No room for fans, wires would be pressed up against the case, etc. Pure and utter chaos.

Now, I have no idea who these Origin people are, but I’ve dealt with, similar companies. But if they’re offering the Asus Rampage III Extreme, you know they’re right-thinking.