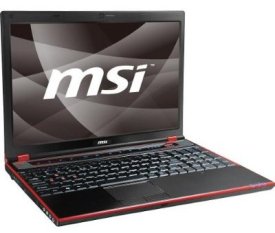 MSI announced the latest in their stable today, the GX640. Built around the Intel Core i5 processor and ATI Radeon HD5850, it’s definitely a contender in the gaming notebook arena. In fact, it’s been selected as the notebook of choice by the number one pro-gaming team in North America.

The GX640 comes standard with the previously mentioned Core i5, an ATI Radeon HD5850 with 1GB of DDR5, and 4GB of system memory. It’s packing a 15.4 inch screen, so it’s relatively portable, and the 9-cell battery should help with battery life. The Gx640 is available now at Amazon.com with an MSRP of $1099.

CITY OF INDUSTRY, CA – April 21, 2010 – MSI Computer Corp., a leading manufacturer of computer hardware products and solutions, is proud to announce the availability of the new 15.4-inch GX640 gaming notebook. The GX640 comes locked and loaded with Intel’s powerful new Core i5 processor and the ATI Radeon HD5850 graphics card with 1 GB DDR5. It is the gaming notebook of choice for Evil Geniuses, the number one ranked professional gaming team in North America.

“When you’re competing at the absolute highest level, your equipment has a huge effect on your performance,” said Alexander Garfield, Executive Director of Evil Geniuses. “Our professional gamers stay on top of the competition with the help of the world’s finest gaming Notebooks from MSI Computer. They give us the edge we need to bring home championship after championship.”

GX640’s new GPU supports DirectX 11 graphics, future-proofing the notebook for the next generation of games and 3D graphics. Its Core i5 processor improves battery life by as much as 15% and features Intel’s new Turbo Boost technology which can increase overall performance by as much as 30%, ensuring smooth gameplay.

The new lightweight notebook is housed in a stylish brushed aluminum case with fire engine red accents The GX640 features a raised chiclet keyboard, for increased accuracy and comfort while typing, and clearly marked W, A, S and D keys for quick response while gaming.

The GX640 is priced at $1099.99 and is available now at Amazon and will be available on Newegg later this month.