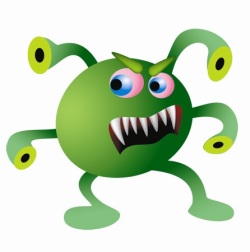 It is an absolute miracle that I have never had a virus, trojan, or other form of computer bug on this PC. I mean, if we’re to believe Symantec, then fully 51 percent of the viruses, trojans, and every other form of computer malware ever was spotted in 2009. That means that from 2008 going back to when Symantic first started keeping track of such things, all of those years only make up 49 percent of the viruses and so forth, while 2009 on its own accounts for 51 percent. That’s pure madness.

It’s madness, but it’s probably not too hard to believe when you try to break things down for even a moment.

A lot of the new computer bugs (I’m going to keep saying “computer bugs” as a handy catch-all, if only for my convenience) are delivered by way of social networking sites, and social networking sites are a fairly new, um, invention. I guess invention’s the word. Then there’s more people online now than were ever online before, and many more people with broadband than ever before. These “noobs,” to use a stupid word, leave the computer on all day long, and it’s always connected to the Internet—how many of them have a properly configured firewall, or anti-virus software with up-to-date definitions?

So there’s more potential victims, but there’s more criminals, too. Apparently there’s some sort of Easy Bake Oven for hackers called Zeus. It’s a $700 kit that makes it easy for budding criminals to write and deliver malware. So if every two-bit crook wants to make a name for himself, he simply buys that kit, then goes to work. Sooner rather than later, he’s all up in your Facebook, stealing ur passwords.

Again, so much of these computer-related crimes can be prevented with a little common sense. Your bank is never going to ask you to “verify your account” or whatever, and Blizzard is never going to whisper you in World of Warcraft demanding to know your account credentials. Microsoft will never IM you about your laptop’s “authenticity,” and Apple will never send you a letter asking for its phone back. Oh, wait.

The point is, ladies and germs, to keep your wits about you when you’re online.

There should probably be more robust computer education in U.S. public schools, so as to raise the next generation of netizens to know not to reply to e-mails promising “FREE IPAD CLICK HERE.” (Irony says hi.)