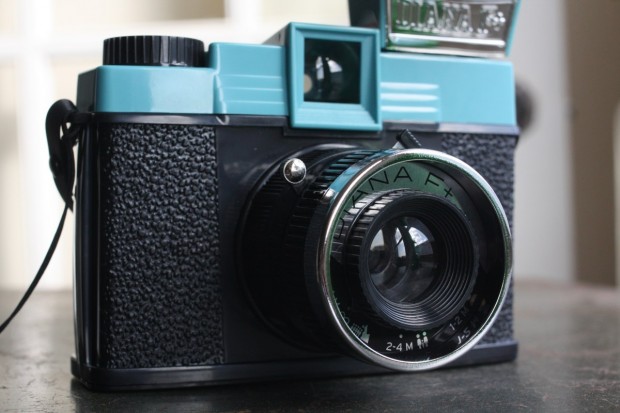 Short version: It’s not for everybody, but the Diana F+ with the instant back add-on is your best bet for recapturing the magic and spontaneity of the Polaroids of yore. Flimsy construction and erratic picture-taking may put off some, but unpredictability used to be in photography’s nature, and for me it was fun to return to that.

Lomo wants to give one away, too — details below.

I wrote last month that “The Polaroid saga is a long and strange one. And the last couple years have been especially strange. Bankrupt, reanimated, relaunched, sold out, bought up… I wouldn’t be surprised if Polaroid showed up on Dancing With The Stars.” All this drama is fun enough for a gadget reviewer who writes this stuff up, but what if you’re someone who legitimately just wants a fun instant camera to have at parties or out with friends? One can’t count on Polaroid any more, and although digital is great, it’s obviously not the same. I put myself in these shoes for a bit and, after noting that Lomography’s LC-A+ was getting an instant back, I contacted them about reviewing a camera somebody like you or me might want to pick up for plain instant film fun. They directed me to the Diana F+. 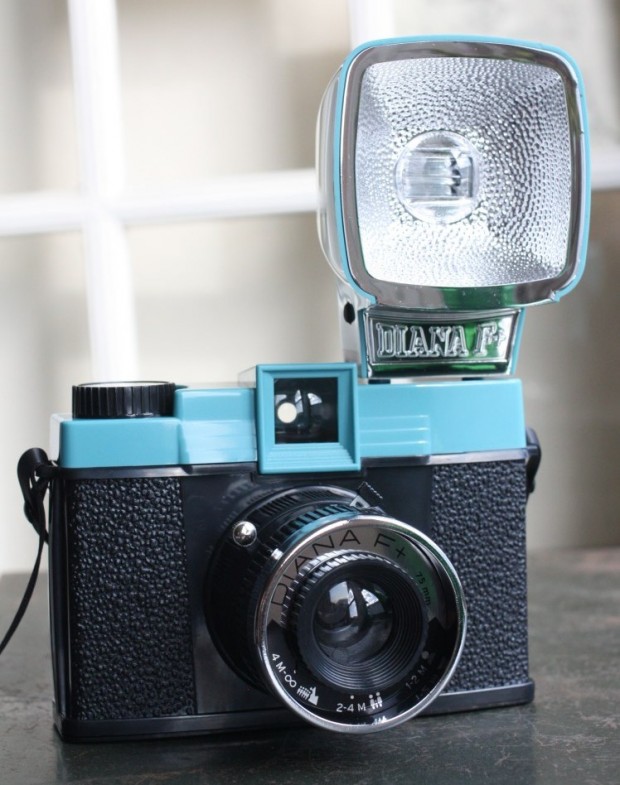 The Diana F+ is a remake of the classic Diana from the 60s, “updated” with rather cheap plastic construction but all in all a faithful reproduction of the famous manual camera. It should be said right away that this camera really does feel like a toy. And not a nice toy. It’s light as a feather and almost entirely plastic. It’s sturdy enough, but I wouldn’t trust it after a few drops. You just have to get past that, though — remember how rubbish film point-and-shoots used to be? This is no worse.

The point of the Diana F+, however, isn’t to be a luxury item. At $90 it’s practically an impulse buy. Its charm is in the throwback factor: it shoots to a number of films (depending on whether you accessorize with different backs) but out of the box it shoots to 120. I’m not reviewing that portion of it, however. My thoughts on the camera’s functions and such apply just as much to using it without the instant back, but of course you have to go through the whole development process and all that. So let’s move on.

The camera is fully manual, and in a way that makes you feel kind of goofy. It’s all so inexact and unpredictable that as denizens of a pixel-perfect digital age, most of our readers will find it extremely foreign if they have no experience with older film cameras. I happen to have grown up shooting black and white on a Canon SLR, but even that didn’t prepare me for the truly lo-fi process going on here. 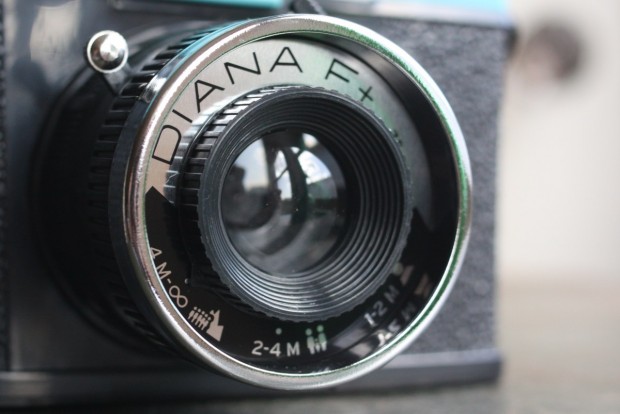 Because it’s a viewfinder camera, focus is kind of a guessing game. There are three settings: 1-2m, 2-4m, and 4-∞m. Those of us used to imperial units may have some trouble, but after a roll or two it’ll seem second nature. The focus is pretty forgiving, and at any rate the inexact nature of shooting a camera like this makes it seem less important. Exposure is a little more important to think about, and it too has only a few settings, labeled only as suggestions: cloudy, partly cloudy, sunny, and pinhole. Again, picking the right one becomes second nature after a while, though you’ll have to be satisfied with some less-than-optimal shots before you get it right. Lastly, shutter speed is limited to two options: auto and manual. Auto is about a 60th of a second, suitable for slow-moving subjects, but it’s more just to have a known quantity to expose with. Otherwise you have to time it with your brain using the manual, or bulb, shutter mode, which simply exposes for as long as you hold down the switch. I got some great shots using this and the flash, but it’s not for everyone, and a knowledge of exposure values and such helps.

Manual advance and exposure means you can do multiple exposures on the same piece of film. My experiments in this area were largely unsuccessful, mainly because i ran out of film, but you might have better luck. As I’ve noted, experimentation and unpredictable results are what make this camera a different kind of fun than a digital.

There’s a removable flash with a great retro look for dark shots. It’s extremely bright, so you might consider putting a napkin or two in front of it, but once you get an idea of its power, you won’t overexpose too much. 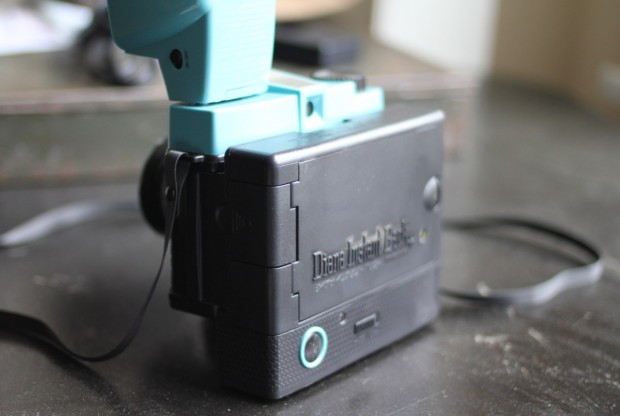 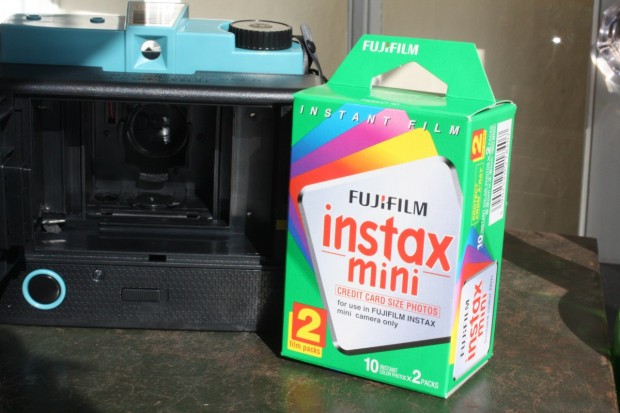 The instant back is what makes this camera a worthy buy for fun-loving photogs with a little scratch to spare. It costs as much as the camera ($95) but if you buy them together you’ll save a little money. Installation is a snap — though the camera looks rather misshapen once you put it together. The back also throws off the balance, so you’ll need to consider that if you’re interested in pinhole exposures.

It shoots Fujifilm’s Instax format, which costs about $12-$14 for a pack of two cartridges, each with 10 exposures each. That works out to about 65¢ per shot. Expensive to be sure, but remember that includes processing and printing. And of course, we all know the value of the instant photographic memento. It’s the reason I’m doing this review.

Instax film is significantly smaller than Polaroids. Each shot is almost exactly the size of a credit card. Some people I talked to liked the little shots, some preferred Polaroid’s big ones. I prefer the big ones, sure, but the little guys are charming too, and Polaroid cartridges are scarce and expensive right now so the point is almost moot. There is some exposure difference between the 120 and Instax film (you have to set the camera to overexpose, essentially) but it didn’t seem to affect many of my little compositions. You can see some of them in the gallery below. 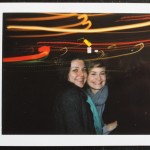 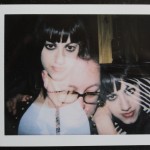 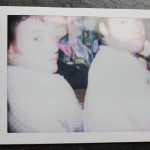 Those were with my first packet of film. I was already getting the hang of things, but framing is difficult as there are no frame guides. You get a feel for it, though.

Taking the Lomo out to a birthday party at a local bar, I found myself besieged with questions. Everybody thought the little Diana F+ was adorable, and everybody fell in love with the little instant shots. Most also expressed disapproval at the build quality, but were pleasantly surprised by the price. If you’re a social photographer, this thing comes highly recommended.

There are a number of other lenses and film backs you can apply to the Diana, but I didn’t get a chance to try any out. Just keep in mind that you’re not limited to the focal length it comes with, if you’re interested in spending a little more.

Obviously it’s a matter of taste whether or not a “novelty” camera like this is worth the $164 it will set you back. Personally, I think it’s a bargain. Instax film isn’t going anywhere, and 120 has been around for a century. It’s fun to shoot and the results are charming, though usually not what you expected. Fuji has its own Instax cameras out there, but they’re not nearly as fun and cost just as much. If photography is a hobby of yours and you miss the old days of film and instant, the Diana F+ is a great way to get back to them without much of a commitment.

Now, the contest! It’s pretty simple, really. Lomography wants to give away a Diana F+. All you have to do is send an email to crunchgear at lomography dot com saying you want it. The catch? You’re going on their mailing list for sales and new products. Of course you can opt out via the normal means later, but you will be giving them your email address. We’ll pick a winner randomly on Friday, so get in there.