App store GetJar has released a new conversion tool to help developers of all open platform stripes track user engagement. It’s a simple, automated process that tells developers whether a user who downloaded an app has actually opened and engaged the app. All that incoming data can then be broken down by phone, country and even network, becoming a potentially powerful diagnostic tool for developers who need to know how their apps are operating across various devices and networks.

This is how it works: a developer signs up for an account on GetJar. The developer adds GetJar’s conversion code into their app (it’s free), which is then published on the site. When a user downloads and then opens the app, the app pings GetJar about the event. Statistics on engagement show up on the developers dashboard: 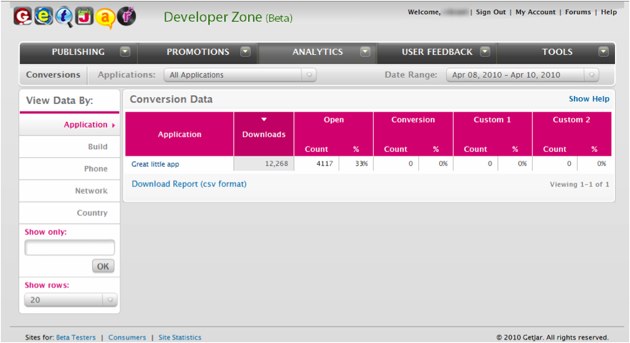 What’s neat about this service is the statistical breakdown and the ability to tailor the feedback system. GetJar lets you measure conversion at four critical points. The first one, as I mentioned, is when a user opens your app for the first time. You can then customize the last three options to fit your analytics appetite, for example, maybe you want to track how many users register for a certain option or pay for a service, all of that can be gathered and organized by GetJar.

Billing itself as the “second largest app store,” GetJar specializes in the world outside of the iPhone. Of course, there are some iPhone apps on GetJar, but the site is better known as a vault for all types of apps (Android, Blackberry, Flash, Windows Mobile, non-smartphone, etc.). There are more than 68,000 apps on GetJar and more than 896 million downloads to date. When I talked to the VP of Product, Chris Dury, about the iPhone OS 4.0’s new terms of service (which will apparently block GetJar’s new conversion tool) Dury seemed unfazed: “We will continue to serve developers across all open platforms, regardless of Apple…”