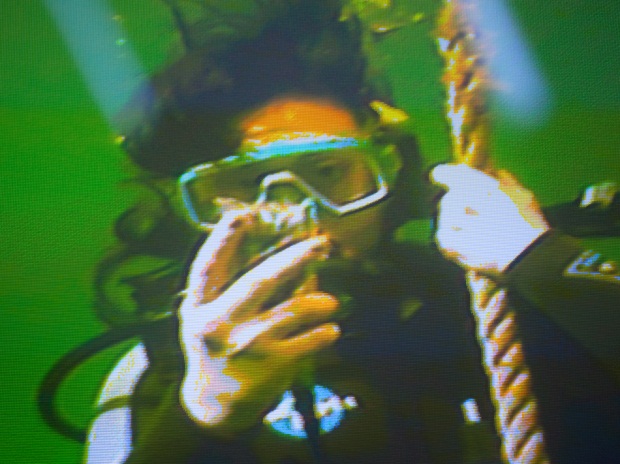 And you thought tweeting from space was an achievement?

Ukrainian TV journalist Julia Gorodetskaya (@gorodetskaya) has sent the first documented underwater tweet from the floor of a 19-feet deep dolphinarium in Odessa, Ukraine. The scuba tweeting session was broadcasted by local media (see subtitled video below) and documented by regional press.

The tweet was sent via a mobile phone sealed in plastic from the Twitter website, using the Opera Mini browser. Radio waves passed to the surface through an elongated antenna.

The preparation process and the actual underwater tweeting was also filmed and broadcasted live by Boris Khodorkovsky to his QIK account and published on YouTube and other social media services. You can find pictures of the whole thing on Flickr.

Gorodetskaya, who did not know how to dive or swim prior to the event, sent a total of four messages to Twitter . Below is the first one.

In English, it reads: “This is first in history #underwater_tweet. I told you, @netocrat.”

The event was dreamed up and organized by a national mobile operator to tout the quality of its network. And I can’t help but think about the wonderful opportunity to raise awareness for a good cause in the process that was somehow overlooked, and therefor terribly wasted. 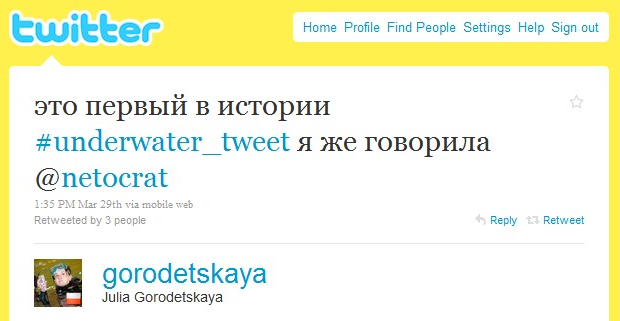