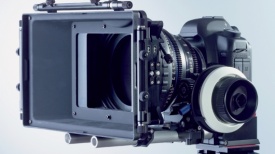 No surprise here, giving how popular DSLR video has become. Someone had to make some lenses to take full advantage of these new cameras, and Zeiss appears to be the first to step up to the plate. The lenses were announced this week in Vegas, with Zeiss stating that these are the first set of cine (lenses) to be compatible with HDSLR cameras.

The new lenses are full frame, use F2.1, and promise to have no vignetting. Zeiss is considered to be one of the top of the line lens makers in the world, so it’s great that they are getting into this field. Part of the problem with video from an HDSLR has been the lenses that most people use. All is not perfect however, because Zeiss charges (and receives) a premium for their products. While no official prices have been announced yet, previously you could expect to pay about $21,000 for a complete set of lenses. Individually they sold for roughly $3000 each.