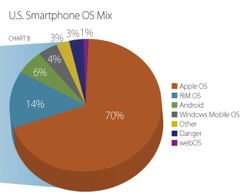 Mobile ad network Millennial Media, which released an iPad specific SDK a few weeks ago, is reporting that Android ad impressions increased by 72% from February to March, globally on the network.

In terms of type of device, the majority of ad impressions took place on smart phones (45%), with Feature Phones seeing 34% of ad impressions, and Connected Devices, like the iPad, seeing 21% of impressions. Unsurprisingly, Apple’s OS remains the leading OS on Millennial’s network with 70 percent share of Smartphone impressions. While Apple represented 40% of overall network impressions in March (top slot for the 6th consecutive month); manufacturers supporting Android enabled devices represented over 50% of the Top 15 Manufacturers. Samsung was firmly embedded as the second largest manufacturer on Millennial’s network, with four devices in the Top 20.

Millennial has been seeing strong growth and is now one of the largest mobile ad networks in the space. The Baltimore-based startup is growing; in February Millennial Media acquired mobile metrics and analytics firm TapMetrics. Additionally, the ad network raised $16 million in Series C funding last November.

But like many of its fellow mobile ad networks, Millennial finds itself in a perplexing situation in the space. It’s unclear how Google’s acquisition of AdMob will shake out (although this may be derailed). Most importantly, Apple’s newly launched iAd platform may throw a wrench in mobile ad networks’ growth as a competing platform.