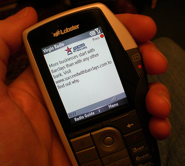 According to a release issued today, Fox, Gannett Broadcasting, Hearst Television, NBC, and eight other broadcast giants are launching a joint venture to develop a new national mobile content service.

The release says that the consortium will utilize existing “broadcast spectrum,” to enable member companies to provide content to mobile devices, including live and on-demand video, local and national news from print and electronic sources, as well as sports and entertainment programming.

The idea is to aggregate all of the broadcast technology from the 12 stations to offers mobile video and print content to nearly 150 million U.S. residents. In addition to broadcast spectrum, the partners will commit content, marketing resources and capital to the new venture. The service will employ ATSC-M/H, an open broadcast transmission system developed by the Advanced Television Systems Committee (ATSC) specifically for mobile devices.

The venture is “designed to complement the Federal Communication Commission’s (FCC) National Broadband Initiative by giving consumers mobile access to video content while reducing congestion of the nation’s wireless broadband infrastructure. In addition, the service’s mobile content network will have the capacity to deliver local and national time-sensitive emergency information to citizens across the U.S.”

It seems like the venture is early-stage at this point, with the networks still building out a management team and raising more funding.