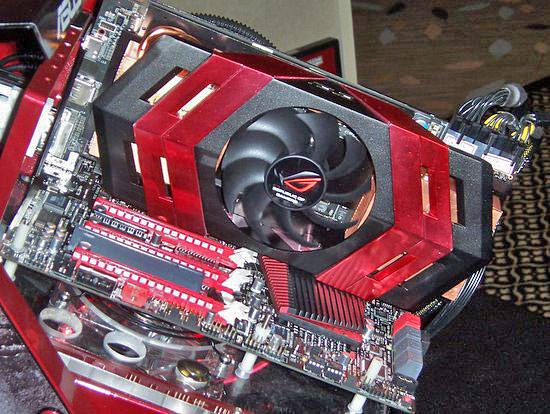 The ATI Radeon HD 5970 is essentially two 5870s slapped together, but underclocked a little bit so as not to melt a hole through your carpet (but will melt a hole through your bank account~!) Asus saw that and was like, “Pfft, wait till you see what we’ve come up with.” It’s called the Asus Ares 5970, a true-to-life dual 5870 solution that doesn’t downclock nothin’ for nobody. Slight problem: it might not actually come out here in the U.S.

This card keeps the two 5870 GPUs running at full speed, which should improve performance more than a little bit, “easily [surpassing]” 3D Mark scores of a standard 5970.

The extra power literally requires extra power, requiring a third auxilary power connector just to keep the thing plucking along. Asus says it still comes in under the magic 300W mark, so no worries there. (A plain ol’ 5970 “officially” clocks in at under 300W, but Asus says it’s more like 260W—more than enough breathing room for its Ares 5970 to operate in.)

You’d probably need an Extreme Edition Core i7, plus the new Rampage motherboard, to most effectively take advanateg of this kind of power. And to what end, so you can play Fallout 3 again, but with 12 extra frames per second?

Meh, who am I kidding, I’d be all over an extra 12 frames per second. Gotta have a hobby!