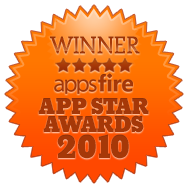 Freshly funded mobile app discovery startup AppsFire has handed out some App Star Awards to a number of developers of unlaunched iPhone / iPad applications this morning at the 360iDev conference in San Jose, California.

This was the second edition of the App Star Awards – the first one was held at the Le Web conference in Paris last year (check out the winners of the first edition).

This year, the winners received a free ad campaign with a good number of online publications, a brand new iPad and a 3 months worth of Animoto Pro.

AppsFire received more than 80 submissions for unreleased applications in 5 days, from developers in 20 countries, including Japan, Spain, Italy, Brazil and even Iceland.

Out of those, 33 iPhone and iPad apps were pre-selected by a professional jury, and for each of the 3 categories (‘Entertainment and Fun’, ‘Games’ and ‘Utility and Other’) the overall winner and the runner-up were announced at the conference just moments ago.

And the winners are …

“IsoCards is a multitouch-gesture and physics driven deck of cards that allows you to play any card game you want. With intuitive controls such as cupping your hand at the top of you cards to reveal them to only yourself. You can also connect your iPhone to the iPad via Bluetooth so that you can literally hold your own cards, and then use the iPad as the communal cards.”