When it comes to social games, one of the most important keys to success is analytics. Fun gameplay is, of course, a big factor, but tweaking viral loops to boost your userbase can make the difference between a fun game no one plays and a hit. Mixpanel is a startup that’s playing an increasingly bigger role in this space, by offering developers tools to track analytics that go deeper than most other available services, like Google Analytics. Last night, I spoke with co-founder Suhail Doshi about the startup’s latest progress.

The biggest news: Mixpanel recently signed major Chinese social game company Five Minutes, which is behind the hit cross-platform game Happy Farm and has 23 million daily users across all of its games. But Mixpanel doesn’t just do games — other customers include Slide, Justin.tv, and Posterous. Doshi says the amount of data flowing through Mixpanel is rapidly increasing, with “hundreds of millions” of datapoints a month (he declined to give exact figures, but did provide the graph below).

Doshi says that much of Mixpanel’s success stems from its funnel analytics, which allow developers to determine where in their application’s flow users are dropping off, so they can optomize accordingly. Doshi explains that some other services offer funnel analytics as well, but that Mixpanel visualizes it in a way that has struck a chord with developers.

Mixpanel launched out of the Y Combinator program last summer, and got another major vote of confidence in February, when it received seed funding from PayPal and Slide founder Max Levchin and Bebo and Birthday Alarm founder Michael Birch — both of whom have extensive experience in analytics. 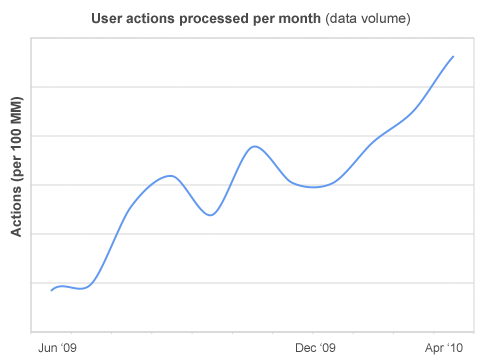