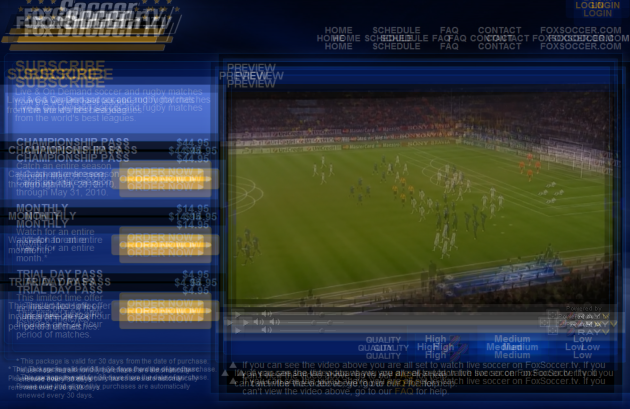 Call me crazy, but Web sites usually work best when they’re online. Nobody knows this better than we do here at CrunchGear, where the site is down a good 20 percent of the time. But at the very least you’re not paying for our crummy service, unlike the poor FoxSoccer.tv customers. Fox wants $45 per season for online access to a whole host of content, including live games from all over the world. It’s really not a bad service when it works, but when it doesn’t work people freak out, and rightfully so.

As already mentioned, FC Messi beat Arsenal yesterday in the second leg of the quarter final of the Champions League. FC Messi now plays Inter in the semi-final. It was a monstrously big game, but if you were trying to watch it on FoxSoccer.TV you were greeted with an error message for the entire first half of the game. “The connection has timed out.” Super.

Nothing is more infuriating than trying to be a good guy, paying for a service than can easily be replaced by a pirated stream, and then running into a wall.

It doesn’t reflect well on Fox, with all of its money, that it can’t run a Web site when it’s most needed. Nobody’s logging onto FoxSoccer.tv Monday at midnight, but during the final stages of the Champions League? It simply needs to work, end of.

EPL Talk, a fine site that I read regularly, mentions that Fox is currently looking for Broadband Product Manager. Maybe this person can sort out the site’s issues.

Again, this is particularly onerous because there are so many “pirate” streams out there on every single match day that it takes a truly pious person to elect to pay for a service that they could otherwise get for free. You pay for a service and expect it to work, you know?