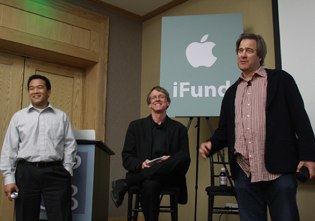 This guest post was written by Kleiner Perkins Caufield & Byers partners John Doerr, Bing Gordon, Chi-Hua Chien and Ellen Pao. We covered KP’s increase in the size of the iFund last week, and additional insights from KP’s Matt Murphy on the iPad. This post goes into a lot more detail on KP’s investments in the first iFund, and what opportunities they see for the iPad.

It’s hard to imagine that once there was no Internet. Just 15 years ago there was no browser, no web point-and-click. It was 1994, and Steve Jobs had left Apple. Steve was making Toy Story, and object-oriented software for Next.

Then one day Bill Joy showed me a beta version of Mosaic, the FIRST web browser. It was magic. Bill said “John, I have NO idea where this is going. You just better dive in.”

The rest of the 90’s were a ONCE-in-a-lifetime experience. Entrepreneurs created the Web, and great ventures – Netscape, Amazon, Ebay, Google, and others. And they changed our lives. Silicon Valley became the Florence of the New, Networked Economy.

The advent of the iPad feels like deja-vu, like it’s happening all over again. Not once, but TWICE-in-a-lifetime.

Newsweek put it best… “Steve has the uncanny ability to cook up gadgets we didn’t know we needed… but suddenly can’t live without.” Steve showed us what computer legend Alan Kay told us… namely, “The best way to predict the future is to invent it.”

At Kleiner Perkins we say “If you can’t INVENT the future, the next best thing… is to FUND it.”

So two years ago Apple and Kleiner Perkins announced an unexpected collaboration: the $100 million iFund. The best venture fund for mobile entrepreneurs.

Think back to March 6, 2008. The iFund idea was risky – some thought crazy. There was no 3G iPhone. No apps. No appstore. And no iFund.

Today the iFund is 14 ventures. 3 are stealth. We are proud to have backed great entrepreneurs in communications, gaming, publishing, media, mobile advertising, and mobile commerce. The iFund companies include:

Each of these companies has received capital from the iFund and participated in bi-annual iFund Summits with other founders, CEOs and industry leaders. Through this network, we’ve seen phenomenal collaboration between iFund companies and tremendous learning in a space that evolves rapidly and changes daily.

iFund ventures have had well over 100 million downloads. And we expect more than $100 million in revenue from these companies this year. We’ve already committed $100 million, and raised another $330 million from others. That’s almost ½ billion dollars. 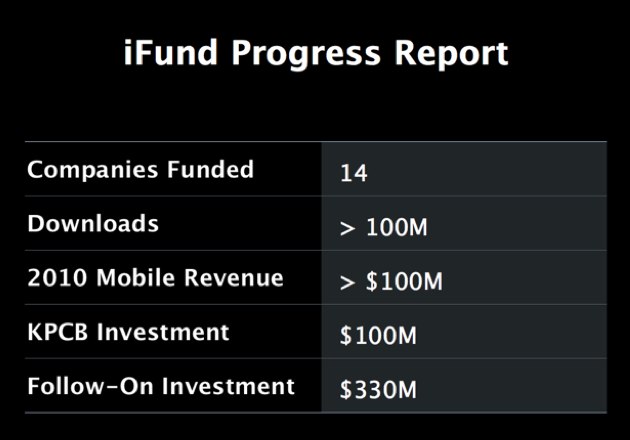 That’s the good news. Truly good news. But the bad news – is that at the worst possible time, on eve of the iPad, the iFund is out of money.

The first rule of venture capital is (to quote my friend Coach Campbell) is…“you gotta have the friggin’ money.” It’s hard to be a venture capitalist if you don’t have the money.

So we’re doubling down on the iFund, increasing its size to $200 million dollars. Here’s the real reason why…

The original PCs in the early 80’s were pretty crummy, that is, until 1984 when Apple introduced the mouse and the Mac… Back then Alan Kay, inventor of the Dynabook tablet, said “The Mac is the first PC worth criticizing.”

Fast forward to 2007. When Steve introduced the iPhone, Alan Kay told him “Steve, make the screen size 5 by 8 inches and you’ll rule the world.”

On Saturday (April 3) the iPad arrived. We believe it will rule the world.

I’ve touched it, held it, and caressed it. It feels gorgeous. It feels like touching the future.

It is not a big iPod. But it IS a very big deal. 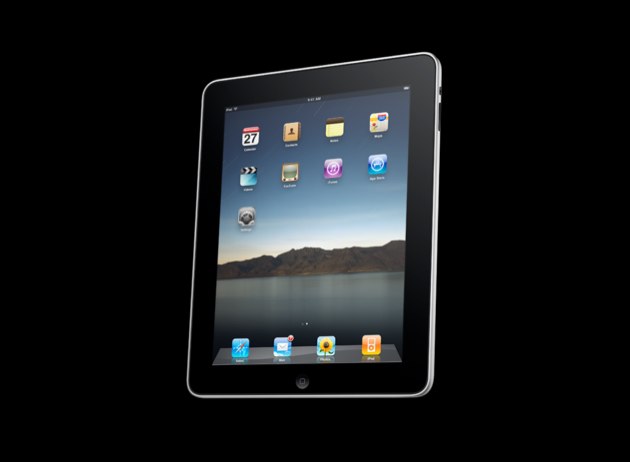 We’re going from the Old World to a brave New World. 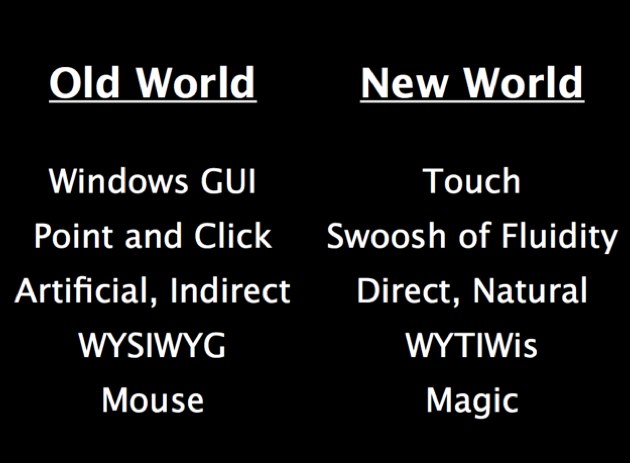 The iPad is the beginning of the New World, the post-PC era.

One More Thing… The Future

April’s iPad shipment is just the beginning. It is truly, just a beginning.

Twice in the last 15 years we’ve witnessed 100,000 flowers blooming. Flowers of applications for the Web, and then for the iPhone. Both were paradigm shifts in how we interact.

Here comes the third shift: interacting fluidly on full and fast screens with vast information stored locally. And that will start a third renaissance of software.

It’s time to move beyond spreadsheets and word processors, beyond web sites limited by browsers… to interactive, connected applications with incredible simplicity, speed, and fluidity.

To a future that transforms games and entertainment, education and publishing, healthcare, communications and commerce.

And almost everything else.

The tablet, the iPad is where these new dreams will blossom. And where the revolution is happening.

Bill Joy says the key to more performance is lower power. Over the next decade he sees 3 times better batteries, and 10 times lower power chips. So we should be able to run, for the same price, 30 times as much application.

And as for storage, there’s no reason that can’t be 30x also. Or, about a terabyte of local, faster, solid state storage. (A terabyte is several hundred movies)

What’s important is the new ways tablet computers will be used. They won’t just be reactive, responding to commands. They’ll also be proactive.

They will be much more than personal computers. They’ll be interpersonal surfaces and services. Working seamlessly, unobtrusively, and comfortably in the spaces between us, between you and me and others.

At Kleiner we’re awed by entrepreneurs. They surprise us with the improbable – they don’t know what’s impossible.

So to Steve, Supreme Commander of the Rebel Forces, and to the entrepreneurs at Apple, congratulations!

To iPADdicts and entrepreneurs everywhere: there’s never been a better time than now to start or join a new venture, and launch a new application or service.

Whether you’re seeking $50K or a few million or a great job… contact us.