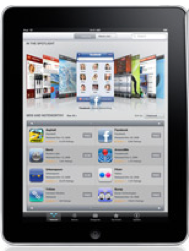 With iPad app frenzy in full force, the App Store is growing by the minute as iPad apps are being approved. Early this morning, Mobile ad exchange Mobclix tallied the number of apps and the breakdown between paid and free apps in the store. According to Mobclix, there are a total of 3,122 iPad apps in the store (keep in mind, these numbers could have changed slightly in the past few hours). As of Thursday evening, there were 2300 iPad apps available for download.

While iPad apps may not be easy on your wallet, Apple’s iPhone app store’s breakdown of free vs. paid apps are similar. As of mid-February, when the App Store included 150,000 plus iPhone apps, 75 percent were paid applications.

Of course, the actual prices of paid apps should go down, if iPad apps follow the same trends as paid iPhone apps. And perhaps companies will ditch their pricey app strategy if users tend not to buy pricey paid apps. Time Magazine’s iPad app costs $4.99 per issue with the Wall Street Journal’s iPad subscription coming in at $17.29 per month.