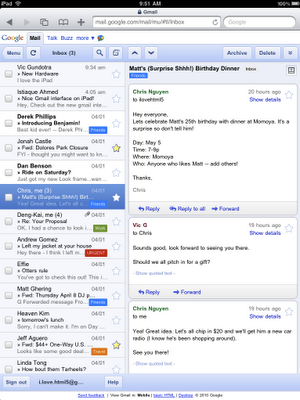 Google has just announced on its mobile blog that it has created a web-based version of Gmail that’s optimized for the iPad. The HTML5-based site, which is automatically activated when you visit Gmail.com from device, features a slick looking two-column view, with a list of messages in the left column and message content on the right.

Of course, the iPad comes with a built-in native Mail application, but the Gmail web app offers a few advantages, as it allows you to use Gmail features like starring, labels, and (perhaps most importantly) threaded conversations. Google launched a similar web app for the iPhone last year.

We haven’t gotten to try out the app for ourselves yet, but it will be interesting to see how responsive it is. In general, I’ve found the iPhone web app for Gmail to be good, but not great — it’s never matched the responsiveness I get on the native Gmail app Android (perhaps the iPad’s speedy processor will make up for this). Unfortunately, it’s highly unlikely we’ll be seeing a native Gmail app launch on the iPad given the ongoing conflict between Google and Apple.

As part of its post, Google highlighted some of the native applications it has that are included on the iPad — Apple is using Google as the default search provider (though there have been rumors that may change to Bing), Google powers the Maps application, and there’s also a native YouTube app.

If you’re looking for more applications for your iPad, be sure to check out our List of our favorite iPad apps. 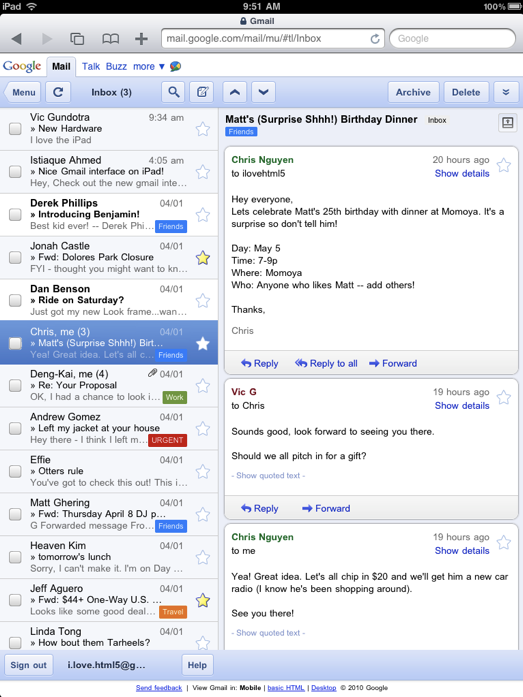