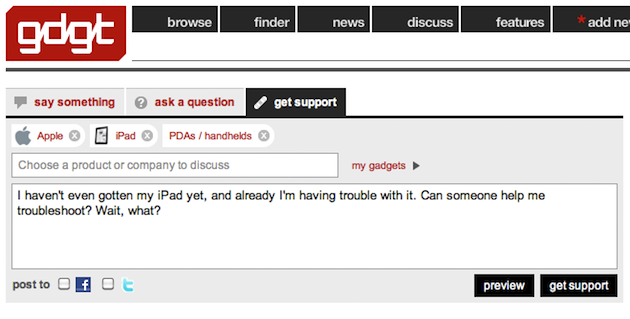 The core of gdgt, the gadget database site started last summer by former Engadget leaders Peter Rojas and Ryan Block, is its community. And online, perhaps the most important aspect of community is discussion. A new update to the service puts the focus squarely on just that.

Previously, on the homepage, you would see a list of the most discussed products and companies, general discussions happening, support discussions, and then tips, trick, and hacks discussions. There was a minimal ability to sort these areas, or you could jump to a specific area, but it wasn’t so obvious how you do that. More importantly, participating was a few clicks away. With the newly revamped homepage, participation is front and center. There’s a new, large comment box to entice you to ask a question, get support, or just say something in general.

Since discussions on gdgt revolve around products, this new comment box has a field above the comment area to enter the name of the gadget you’re talking about. And there is also the ability to tag discussions to specific companies as well. Both products and company names are placed in this tag box and you can enter multiples of each which should help further fuel discussions. When you start typing in this field, gdgt combs its database to autocomplete the product or company that you’re likely talking about. These are then added to the comment area as tags (some completely with nifty favicons). Those who want to get really social can also tweet out their comment or post it to Facebook.

Once one of these comments is submitted, it then resides on the page for the product or company it was tagged to, as well as your main profile stream. Those looking for answers or just more information about products and companies will notice cleaned-up threads with quicker ways to reply. There is also a new bright green button to allow you to easily follow a thread and get updates even when you’re not on the page (these come into your profile) or even on gdgt itself (via email alerts, which you can customize). You can also “like” or “dislike” individual messages in a thread.

Online forums have long been a popular way for users passionate about particular things to interact with one another. This update to Gdgt attempts to better organize those conversations, keeping them highly targeted, while at the same time keeping the site’s focus broad across the whole range of gadgets and companies in the space. I asked Block for his thoughts about this update as compared to something like Quora, the hot question service with an even hotter $86 million valuation. Block notes that he uses Quora, and likes it, but sees more value in getting an answer rather than asking a question. He thinks Quora works well right now because it’s still so small, as they scale, it could be hard to maintain the relevancy. Block believes gdgt can because of the unique social graph they’ve created: users are connected through a product graph.

Block also says that he’s very interested in the social reputation elements that services like Foursquare have been making popular. “We’re looking closely at that,” he notes.

Since gdgt launched last July, Block says they’ve “blown past” their initial internal estimates. Impressively, he says that the site is growing faster than Engadget was when it started. He wouldn’t give any specific numbers in terms of users but did say that it’s in the hundreds of thousands of registered users now. That’s a pretty large product graph. And now they have an easier way to communicate with one another. 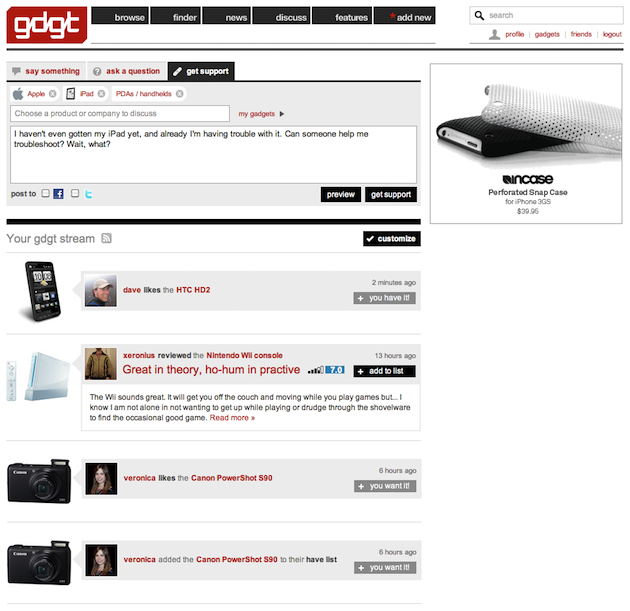 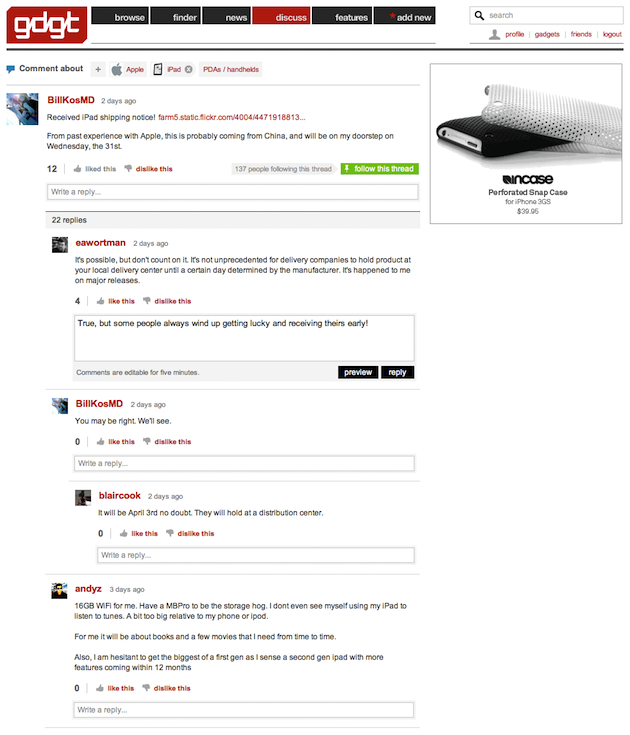