This morning, we broke the news that YouTube would be rolling out its new, streamlined Watch page to all users. The aptly named page is the all-important portion of the site where you actually watch videos (it also features comments, ratings, and related videos). At an event at YouTube headquarters this morning, three of the key people involved with the launch — Senior Product Manager Shiva Rajaraman, UI designer Julian Fumar, and engineer Igor Kofman — walked us through some of the changes in the new design, the logic behind them, and some of the early results they’ve seen.

We first saw the new Watch page in January, when the site started allowing users to opt-in to it. To test the new design, YouTube also rolled it out to around 10% of its users. Among those users, YouTube says that it has see a rise in engagement (which includes actions like ratings and leaving comments) by 7%, and an increase in the number of videos watched by 6%. Those may not sound like huge numbers, but given that this is the world’s most popular video site, that translates into a lot of extra views.

So what changed? In short, everything is much cleaner. The YouTube team said that in 2009 the site added more features than they had in the two previous years combined, and things were getting cluttered. So they’ve decided to prune the hedges.

As we detailed when the redesign first become available,  the new site has streamlined the page header to place a much greater emphasis on search. It has also abandoned YouTube’s long-standing five star rating system in favor of a binary thumbs up/thumbs down system (a change that YouTube has discussed for months).

Less obvious changes: the ‘more info’ button, which used to be a bizarrely small link nestled under the video description, is now positioned directly under the video, with a much larger clickable area. The video uploader’s screenname is now more prominently featured above the video, as is the ‘Subscribe’ button (there will be an opportunity for YouTube partners to brand this area). The related videos listing, which makes up the page’s right column, will now be more consistently positioned. And you can now access the site’s detailed viewing statistics simply by clicking on the viewcount (these used to be tucked under a ‘stats’ menu). 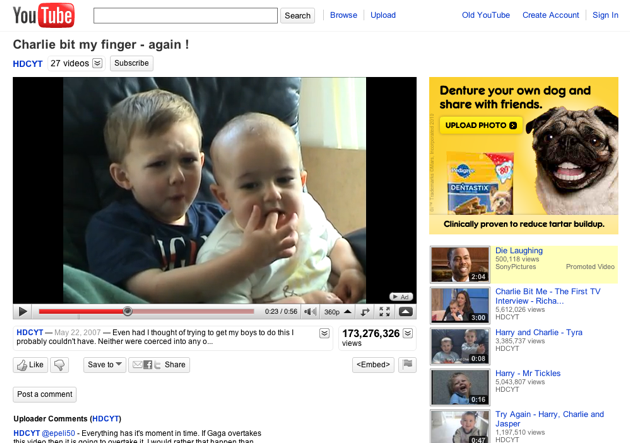