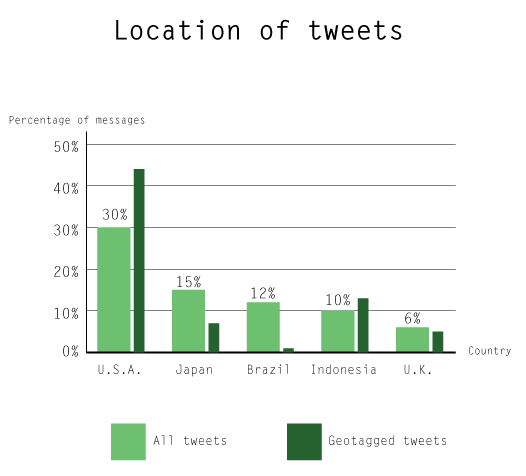 Paris-based Semiocast, which helps brands understand and interact with real-time Web services, has again done a study on Twitter usage. After finding that only 50% of tweets are in English, based on an analysis of 2.8 million tweets, the company has now looked at nearly five times as many Twitter messages in order to gain more insight on the increased international presence of the popular micro-sharing service.

According to an analysis of 13.5 million tweets published over the course of one week, Semiocast concluded that users located in the United States account for only thirty percent of all tweets. The next English-speaking country on the list comes in fifth, with only 6 percent of tweets analyzed originating from the United Kingdom.

Top countries are the U.S., Japan, Brazil, Indonesia and the UK, in that order.

Semiocast says only 0.5% of tweets appear to come geo-tagged. In order to establish the share of countries more accurately, the company also processed tweets and self-declared locations in bios from users with the help of its multi-lingual semantic technology platform, effectively parsing the locations of Twitter users as good as possible.

Semiocast says the strongest growth rate was not registered in the United States, where Twitter is headquartered, but in other regions around the world. Furthermore, English now accounts for less than 44% of tweets, down from 50% merely six weeks ago.

Indonesia, where Twitter is big thanks to partnerships with local carriers, ranks fourth with 10% of messages worldwide or about 5 million messages on a daily basis.

Overall, the sample of tweets analyzed is fairly small, considering that today, an estimated 53 million tweets are published on a daily basis, up from 50 million per day in February 2010.

Nevertheless, other companies who’ve analyzed the internationalization of Twitter in the past have come to similar conclusions: the growth rate of tweets is clearly accelerating outside the United States, and the share of Twitter messages originating from the company’s home country is getting smaller every day. Even Twitter investor Fred Wilson has written about that trend on his blog last weekend.

For more context, Sysomos has published research findings on this topic before.

How long until Japan, Indonesia or Brazil takes the lead at the expense of the United States? 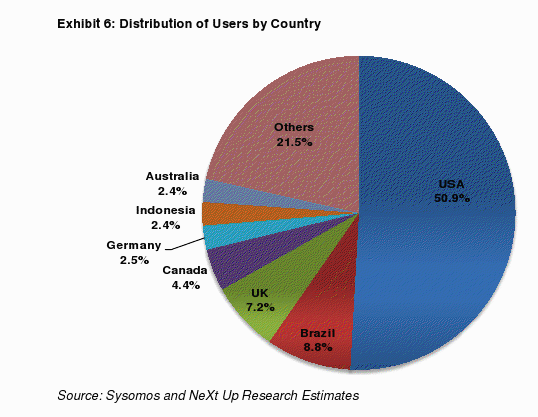