Back in fall 2008, when the App Store was less than 100 days old, I wrote about an incredibly trippy and innovative application called RjDj (iTunes link). The app is a bit hard to describe, but it essentially takes audio or motion input from your iPhone, passes it through a variety of filters, and outputs music that’s customized to your surroundings (you really need to try it for yourself to see what it’s like). Now, RjDj is taking its application to the next level: the company has released a new desktop app called RJC1000 that allows Mac users to easily build their own reactive music for use on any of RjDj’s growing roster of applications.

To take a step back, when you use RjDj, you listen to what’s called a “Scene” — a combination of filters that determine what your reactive music sounds like. A Scene can pay attention to your iPhone’s microphone, accelerometer (so it can ‘hear’ motion), and even your GPS position. It then interprets those inputs to generate a dynamic music soundtrack. Scenes can vary a lot, ranging from pleasant rain drops to psychedelic audio warping that loops back everything you hear endlessly. With the RJC1000 app, you can customize Scenes to make them sound exactly like you want them to. You can get a feel for how this works in the YouTube video below.

I explored the RJC1000 app to try building my own sound Scene, and quickly came to the conclusion that I had absolutely no idea what I was doing. Fortunately that didn’t really matter — after dragging a few effects from the list of options onto the main sound board, I found myself listening to something best described as an auditory mix of running water, crickets, bongo drums, and a swarm of butterflies. I’m sure someone with more patience and skill could come up with something significantly more pleasant. 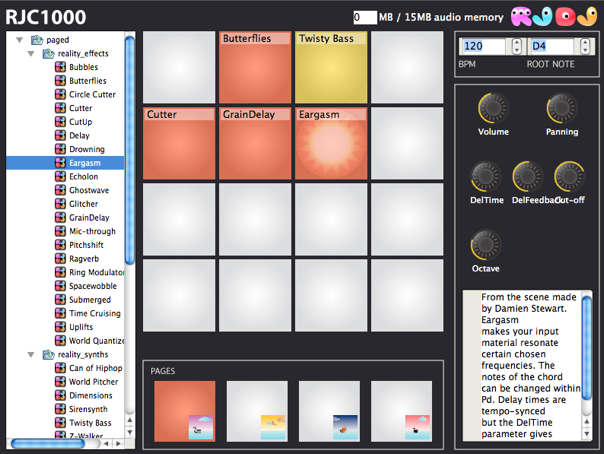 Alongside the new application, RjDj is launching the RjDj Network, which allows reactive musicians (this genre is called “reactive music”) to sell their creations to anyone using the RjDj iPhone application, via in-app purchases. RjDj is taking a 50% rev share of any Scenes sold. The company will also be launching an iPad application on April 3 called RJ Voyager that allows for playback of any Scenes from the RjDj Network, and also let users tweak Scenes on the fly, editing the effects they want playing as their music is generated in real-time.

RjDj founder Michael Breidenbruecker says that developers and musicians have previously been able to create their own Scenes using Pure Data, but that most of them found it too abstract to use (the screenshots I looked at were pretty daunting). The RJC1000 application uses the Pure Data DSP framework, but makes it significantly easier to build a Scene.  He says that beyond the iPad app, RjDj has other applications in the works that will support Scenes from the RjDj network.