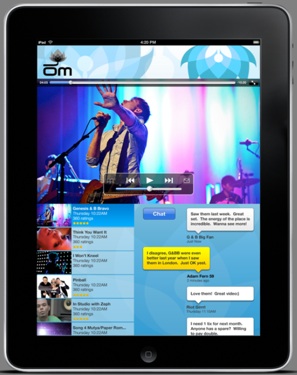 When Steve Jobs tells the technology industry to get in line, it gets in line pretty quick. All the initial hair-pulling and angst surrounding Apple’s decision to not support Flash on the iPad is already mattering less and less. At least for video, most of the major online video platforms such as Brightcove and Ooyala are supporting HTML5 playback in the iPad browser. YouTube might eventually get there as well.

Now Kyte is jumping on the HTML5 bandwagon. Kyte videos will stream in an HTML5 player in the iPad browser using the same embed code that triggers a Flash player on other computers. But Kyte is also going to release a software developer kit (SDK) in the next couple weeks which will let its media partners create apps specifically for the iPad. The SDK will also let them create versions of the same apps for the iPhone and the iPod Touch. This will replace the iPhone framework Kyte released last year.

The SDK will customize apps for the larger screen of the iPad, allowing for a larger video player and more room for chat and show guides. In the mockup above from Om Records, you can see how there is more room for the various elements of the app on the iPad.

Kyte’s main customers are media brands, music bands, and brands such as ABC, Fox News, MTV, Lady Gaga, Alicia Keys, and Calvin Klein who want to publish videos to their Websites and mobile apps all from the same system. Kyte’s new Apple “universal” SDK will allow developers to create apps for both the iPhone and the iPad, and send out the correct version depending in the user’s device. They can also charge once and deliver different versions of the app to multiple Apple devices.