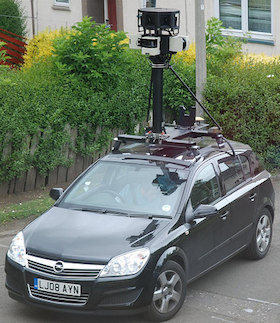 There’s never a shortage of controversy surrounding Google Street View. Even if you think the service is useful and/or cool to look at, you have to admit there’s something creepy about Google cars driving around countries collecting these data with cameras mounted on the roof. And it appears that someone in Germany had just about enough of that.

Police are investigating an incident in Oldenburg, Germany where a parked Google Street View car was vandalized overnight (in German – rough English translation). Apparently, the perpetrator let the air out of the car’s tires and also cut a wire that hooks the roof-mounted camera up with the inside of the car. It seems that nothing was stolen from the car, and none of the equipment on the outside was even taken. So it would seem this is clearly just a sign of protest against Google.

And actually, the person who did the act was nice enough to leave a note on the windshield of the car letting the driver know that the air was let out of the tires (not to mention that they only let the air out, rather than slashing them). Those techie protestors are quite considerate. Well, at least more considerate than Google protestors.