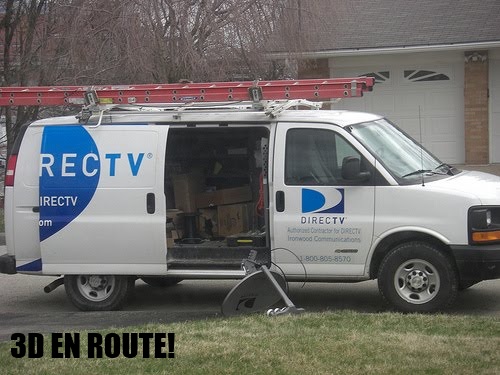 DirecTV will be among the first television providers to offer ESPN 3D. The channel launches this June, and DirecTV will place it alongside two other 3D channels, a 24/7 pay-per-view channel and a movies on-demand channel.

This is a markedly different approach from, say, Verizon’s FIOS, which said that it will only add 3D channels when it feels like it. If I can find an extra $2,000+ (spoiler: I can’t) then it’s good news for me, being a DirecTV subscriber. (I only get Internet service via Cablevision, which already broadcast the country’s first 3D sports event last week in the Islanders v. Rangers at the Garden.)

And as much as it sounds like a broken record, the defining 3D TV moment will be this year’s World Cup. I fully expect people who have zero interest in the sport to at least be curious to check out what it looks like. Hopefully Best Buy and so forth will have the 3D matches on display.

As an aside, I will say how hilarious it is that DirecTV has announced 3D channels before it decides to carry Fox Soccer Channel in HD. Sorta lame.