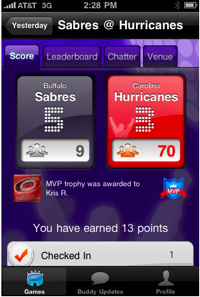 At last fall’s TechCrunch50 event, Chyngle was voted by the crowd as best demopit startup for its branded mobile marketing apps for sports stadiums. Now Chyngle has partnered with mobiTeris to rebrand and reinvent its application as CrowdZone, a free iPhone app that acts as a mobile social network for crowds at sporting events.

CrowdZone’s app allows users to “join” a crown or start a crowd around a sports event. While the app is location-based, you can also participate from your coach and can use the app’s functionality even if you aren’t at a particular event. Within a crowd in the app, you can check-in to a game, similar to a check-in on popular mobile social network Foursquare. Once you’ve checked in, you can see other people who are using the app and where they are located in the crowd.

You can share comments and pictures with your crowds and participate in “fan activities,” such as cheers or the wave. And as you participate in the application, you earn activity points and badges, with the aim of achieving the “Crowd MVP” status at an event.

Although partnerships with sports teams and stadiums aren’t necessary for the app’s functionality, CrowdZone already has one professional sports team that is on board with its offering. The NHL’s Carolina Hurricanes will be promoting CrowdZone’s app to their fans through television and radio ads as well as on their Web site, Facebook and Twitter fan channels.

Chyngle and CrowdZone’s co-founder Todd Sullivan says that revenue hasn’t been turned on yet, but the startup is looking to monetize the app in a variety of ways. Sullivan says that teams could possibly leverage a CrowdZone network to identify and message influential fans. Sullivan adds that CrowdZone also provides a channel for teams to engage in commerce with their fans around virtual and real-world goods. CrowdZone’s real-time analytics, generated from crowd behavioral and location data could provide teams with valuable insight.

One of the biggest challenges CrowdZone will face is actually getting users to download and use the app. But if the startup continues to get endorsements and publicity from professional sports teams, the app could gain popularity as a niche mobile social network for die hard sports fans.