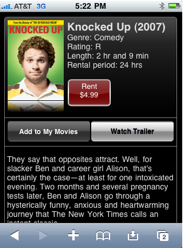 Mobile entertainment startup mSpot is extending its Mobile Movies site, which will let users stream full-length movies on their mobile phones, on the web, so you can enjoy mSpot’s online streaming movie service on your computer.

mSpot has struck deals with Paramount, Universal, Image Entertainment, and Screen Media Ventures to stream full-length movie rentals to users’ PCs and cell phones, allowing you to switch between both devices as you pick up and leave off throughout a movie. The PC streaming functionality builds upon the mobile movie service mSpot launched last year. The service includes 1000 titles that can be streamed to both a computer and mobile device.

The service works on over 50 different handset devices – including the iPhone, Blackberry, Palm, Android, Windows Mobile and others. Users can stream individual movies for $4.99 each or join a monthly Movie Club: $9.99/month for up to 4 movies, $12.99 for 6 movies, or $15.99 for 8 movies.

Of course, mSpot’s main competition is Apple, which lets Mac, iPhone and iPod touch users, download and sync movies and shows onto all of their devices via an AppleTV. But mSpot And mSpot will face other series competition from Netflix, when the company eventually moves into the mobile space.