HeyZap, the startup that makes it easy for publishers to integrate casual games into their sites, is entering a very hot new territory today: social gaming. The company has partnered with fifteen social game developers, and will be integrating their games into the HeyZap platform over the next few weeks.  That’s significant, because it means that these games will be available on the 150,000 sites across the web that have integrated HeyZap in addition to Facebook proper.

The new functionality works using Facebook Connect (all of the social game partners have already deployed their games on Facebook, so they don’t have to make any changes). After a publisher embeds the HeyZap widget onto their site, users can log in and play as if they were on Facebook, with the same virtual goods, stats, and social graph they’ve already established.

Among the 15 social game partners are Aeria Games, Game Duell, and TheBroth; featured publishers include eBaum’s World, hi5, and Webs. Hoop Fever Live from TheBroth and FishStory from RacoonX will be available starting today, with the rest of the initial game partners rolling out in the next few weeks.  Co-founder Immad Akhund says that HeyZap is hoping to integrate more social gaming companies in the near future.

HeyZap handles the payment system, with publishers receiving 15% of the proceeds, and HeyZap and the game developer split the remainder 30/70 (in the developer’s favor). Here are some of the more technical details HeyZap gave us on how this works:

Heyzap works with Facebook Connect APIs and simulates all the classic viral loops that Facebook developers use inside of Facebook including stream posting, gifting and inviting friends. Heyzap offers a full API suite for packaging the social game in a single SWF without the need for Javascript usage; which enables the viral swf distribution seen in casual games and online video. Alternatively, developers that have non-flash games can use Heyzap’s iframe solution, which allows all social games to be ported outside of Facebook.com whether they use flash or not.

It’s possible for social games to use Facebook Connect to expand beyond Facebook without HeyZap’s help — we saw Zynga do just that when it launched a version of FarmVille at farmville.com and MSN games. But HeyZap’s system makes it easy for publishers who may not have the knowhow to integrate Facebook Connect to do this, and it handles all of the arrangements with the game developers. 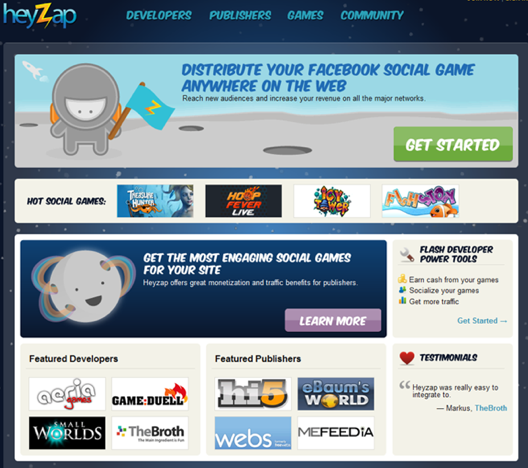