Things on the Web used to be simple for bloggers and publishers. You published on a Website, and then syndicated it out to other channels via an RSS feed. But then realtime streams started taking over and RSS couldn’t keep up, even though technologies like PuSH are speeding it up. So publishers take their RSS feeds and publish the headlines and a link directly to Twitter with a service like Twitterfeed. But what about Facebook, LinkedIn, Tumblr, and all the other social streams coming down the pike? 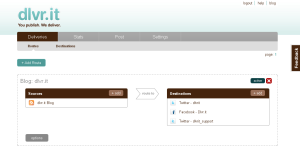 There are so many ways to syndicate your feeds that it is becoming unmanageable. A new service called Dlvr.it is launching in open beta today to help publishers deliver their feeds anywhere they want. Dlvr.it is a new product from in-stream advertising startup Pheedo. Once you sign up, you select a feed as an input, and then you select where you want to deliver that feed as an output. Depending on the destination, the feed will appear differently (a headline with a short dlvr.it link for Twitter, a longer excerpt for Facebook). You can set it to deliver all headlines to Twitter, but only a certain subset to Tumblr.

The workflow is a little bit like Yahoo Pipes. You fill in the blanks, and can set the number of updates per channel, or can even trickle out stories throughout the day if they get published all at once. Or it can all be pushed out in realtime using the PuSH protocol. Dlvr.it has its own short URL and also supports bit.ly. It can add auto-hashtags to your Twitter feed based on pre-existing category tags.

Once you start syndicating through dlvr.it, you can monitor clicks, posts, retweets and other stats in a dashboard. Twitterfeed also offers analytics, but only for Twitter. Dlvr.it wants to keep adding services and open up an API to support more inputs than just RSS feeds. On the other hand, Twitterfeed is much simpler and already has a lot of momentum.

Dlvr.it is a free service. Check it out and tell us what you think in comments.