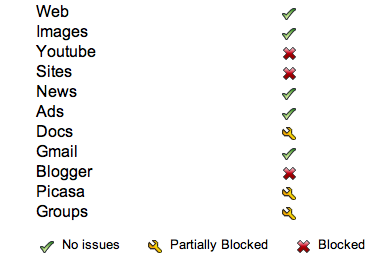 The Chinese government is definitely not pleased with Google right now. In response to Google’s decision yesterday to stop self-censoring its search engine and other sites in China by redirecting them to its site in Hong Kong, China is now censoring some search queries itself. A Google spokesperson confirms to us “it seems that certain sensitive queries are being blocked. However, the Google.com.hk site is not currently being blocked.” Checks with contacts inside China also confirm that the Hong Kong site remains accessible.

In an article today, the New York Times is reporting:

mainland Chinese users on Tuesday could not see uncensored Hong Kong content because government computers had either disabled searches for objectionable content completely or blocked links to certain results.

Google maintains a page showing the availability of its various services in mainland China. However, that page has not been updated since March 21. Google tells us it will update the page soon.

In addition to censoring “sensitive queries,” China is also beginning to possibly shut Google out of other Chinese markets. The New York Times reports that the Chinese government is pressuring China Mobile to kill a mobile search deal with Google, and that China Unicom may cancel its plans to launch an Android phone.

Google is engaged in high stakes corporate foreign policy with China. It is taking a very technical approach to dealing with China, doing whatever it can to stay within the letter of Chinese law while no longer continuing to act as an arm of the Chinese censors. That’s how it came up with the idea to redirect Chinese users to its Hong Kong servers, where different rules apply. In a post yesterday, Google’s chief legal officer David Drummond noted that the “it’s entirely legal.”

Maybe so, but that doesn’t mean China won’t retaliate in both overt and covert ways. By literally distancing itself from China, Google is publicly snubbing the Chinese government. Chinese officials do not like to be publicly snubbed. They will likely retaliate in an effort to teach Google a lesson.

Google may very well have just “lost” China as a market. But it knew that when it decided to stop playing by China’s rules.