Ash Patel, a senior Yahoo exec and one of the company’s longest serving employees, will shortly be stepping down. His last day will be next Monday.

Patel was one of Yahoo’s first sixty employees, and joined shortly before the company went public in April 1996. There are just six current Yahoo employees who joined before Patel, the company says.

His first job at Yahoo was “technical Yahoo,” a title given to all engineers. He created the My Yahoo product and also built Yahoo’s first instant messenger client. He stopped coding for a living in 2002 and has since been in a series of product and engineering executive positions.

His current role is EVP Product Architecture & Strategy. He has also served as Chief Product Officer and has run the engineering group at Yahoo.

I met with Patel this morning for a little over an hour to talk about his time at the company the early days at Yahoo. 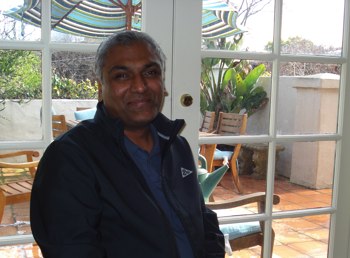 One of his favorite moments was summer 1996, he says, when cofounder David Filo would stay up all night watching the news and manually updating results from the Summer Olympics in Atlanta. Most updates to Yahoo’s website were manual in those days, he says, although there were a few partners sending in content in a variety of formats.

Patel also talked about how annoyed he would get trying to test Yahoo’s instant messenger client during the wee hours of the night when no one else was awake. He couldn’t test new features on his sleeping friends, so he added a feature where a user could add themselves as a friend. That feature is still part of Yahoo Messenger.

Says Filo, “Did you know that you can add yourself as a contact in Yahoo! Messenger? Well, you can. Why? Because Ash needed a way to test the code to see if it was actually working the way we wanted it to while Messenger was first in development. He couldn’t wait. He wanted that feedback immediately and he wanted that chance to get things right on the fly. That’s the kind of ingenuity Ash brought to Yahoo!. He helped us to move faster than we thought we could and to find new ways to look at our work from the user’s point of view.”

Patel says Yahoo is in a transition period but is building the infrastructure it needs to compete in the future. Everyone is focused on social right now, he says, and so is Yahoo. But they have product plans for “what’s next after that” as well.

I asked Patel about Yahoo’s current troubles, saying that Yahoo sort of feels like England in 1940, surrounded by the Nazis (I’m not sure who the nazis are in my analogy, but we met very early this morning and it was the best I could come up with). His response – “Well, look who won the Battle of Britain…Things turned out ok.”

We also had a side discussion about whether Carol Bartz could play the part of Winston Churchill. But like I said, it was early.

What’s next for Patel? He says he’s going to take a few months off with his family and start to think about the future this summer. He advises a few startups, he says, although he doesn’t seem to be suggesting, yet at least, that a startup is in his future.

One thing is clear – Patel will be missed. He is a genuinely likable and intelligent guy who’s seen a lot over the last 14 years. It’s a loss for Yahoo that he’s leaving, but this guy clearly will continue to bleed purple.