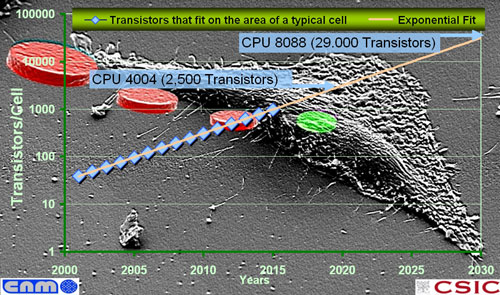 Computers are getting smaller and smaller. One need only look at the proliferation of smartphones for proof of this. The trend toward miniaturization is only going to continue. Pretty soon, we’ll have computers inside our bodies, rather than carrying them around with us! Scientists have recently successfully inserted silicon chips into living cells. The initial applications for this research seem focused on intracellular sensing and data acquisition, but that’s only just the beginning.

After inserting the chips into the live cells, the researchers made sure that the cells remained alive and healthy. They found that over 90% of the chip-containing containing HeLa cell population remained viable 7 days after lipofection.

The cells used in this research were HeLa cells. There’s a very interesting history to the HeLa cells, and I never would have known about any of it had I not chanced to hear an NPR piece about a new book: ‘Henrietta Lacks’: A Donor’s Immortal Legacy.