AOL has recruited a few celebrity chefs and foodies; including Curtis Stone, Food & Wine’s Gail Simmons, and Marcus Samuelsson; and the famed Culinary Institute of America to launch food website KitchenDaily. Similar to Epicurious, AllRecipes, or FoodNetwork.com, KitchenDaily features a recipe database of meals that have been tested by top chefs, food magazine and cookbook publishers.

AOL has recruited a number of talent from Conde Nast’s recently shuttered Gourmet Magazine. Former Gourmet Editor Cheryl Brown is the editor-in-chief with a number of former Gourmet writers named as contributors. Epicurious’ Megan Steintrager will be the senior editor of the site.

In addition to recipes, KitchenDaily will feature a meal-planner tool, cooking lessons, cookbook reviews, and and more than 250 instructional videos created by celebrity chefs and industry insiders. AOL already has a food blog called Slashfood though its unclear how the two sites will be integrated.

The recipe site space is crowded, with a number of worthy competitors vying for traffic. And even Microsoft’s Bing launched its own recipe search product. But its seems that KitchenDaily aims to be part magazine, part recipe site, so it may be able to differentiate itself and possibly attract many former Gourmet readers. We know that AOL CEO Tim Armstrong is bullish on niche content so the launch of this site fits into the company’s strategy nicely. 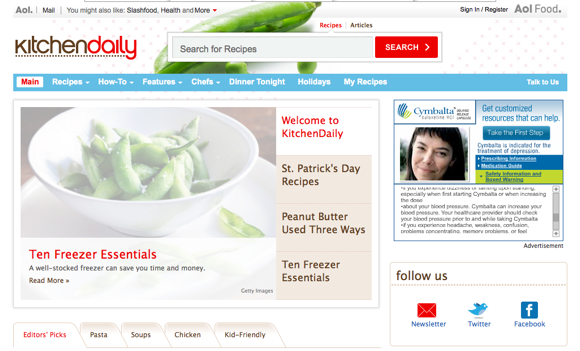