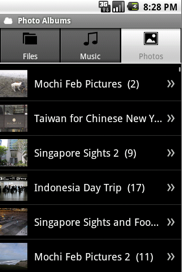 File syncing and storage startup Zumodrive is expanding its mobile offerings today with free applications for Android and Palm phones. While there are a plethora of syncing and storage services available to users, ZumoDrive, which spawned from Y Combinator startup Zecter, has a different take on file syncing. Similar to other services, Zumodrive creates a drive on your device that is synced to the cloud. But service includes a slightly different twist-ZumoDrive tricks the file system into thinking those cloud-stored files are local, and streams them from the cloud when you open or access them.

The startup launched an iPhone app last year, which let users sync their content to their phone without having to deal with local storage capacity issues. The Android and Palm apps include much of the same functionality. The apps allows users to sync their entire iTunes library on their phones even though the songs are not locally saved. Plus, ZumoDrive allows you to import your files. photos albums and videos onto your Android and Palm phones.

Additional features include video streaming from ZumoDrive directly to devices in MP4, H.264 format, music organized by artist, albums, and even playlists created on other devices, the ability to stream music in the background and listen to music over both 3G or EDGE networks.
Additionally you can access and view Microsoft Office documents and PDF files. 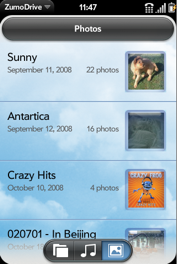 ZumoDrive has been gaining traction over the past year. Fresh off of a $1.5 million funding round, the startup scored a deal with HP in January to to power the backend of the technology giant’s CloudDrive on all HP Mini netbooks.

Last year, ZumoDrive released a new version of its system that wirelessly syncs playlists between devices, auto-detects content, and lets users link file folders on their devices to ZumoDrive only once so that changes in that folder will always be linked to ZumoDrive. The service was also upgraded to integrate well with media applications, like iTunes, so users can play entire music libraries saved in ZumoDrive on multiple devices without manually syncing content. We initially reviewed Zumodrive here.

Zecter previously launched a product called Versionate, an office-wiki product, that we first covered in July 2007. We wrote about them again a year ago. ZumoDrive faces competition from Dropbox, SugarSync, and Box.net.