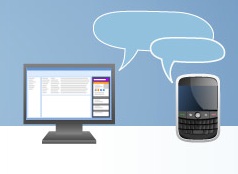 It took almost a year, but Xobni finally released its email app for the Blackberry. It works as a standalone app integrated with the email on your Blackberry, but similar to Xobni’s Outlook plugin, it ranks your contacts by importance and pulls in social data from Facebook, LinkedIn and other places.

Along with the Blackberry app, Xobni is introducing another product which may turn out to be more important in the long run. It is called Xobni One, and it syncs your Xobni contacts in Outlook with your contacts on your Blackberry, all in the cloud. As Xobni rolls out more apps in the future, Xobni One should be able to sync contacts across those as well (very Mesh-like).

Xobni One is a way to sync your desktop and mobile contacts. If you use Outlook on your desktop at work, but Gmail on your Blackberry, Xobni One reconciles the two. And when you leave your job, your contacts stay with you. Xobni One isn’t free. It costs $4 a month or $40 a year, bundled with the Blackberry app. Keeping your contacts in sync is expensive. Doesn’t it seem that Google or Microsoft will eventually just do this for free?