This morning Google announced a new Blue Dot feature on the mobile version of Google Product Search that shows whether a product is in-stock at nearby stores. This seems to pose a threat to startup Milo, which highlights local inventory in product search results both on the web and mobile devices. Milo’s co-founder Ted Dziuba subsequently responded to our post with a Tweet that read “Google Product Search has availability for 5 retailers vs. Milo’s 49. Super cool web service, bro.” At launch Google only has partnerships with Best Buy, Sears, Williams-Sonoma, Pottery Barn, and West Elm. Milo’s list of merchants includes a range of retailers, from BestBuy and Nordstrom to Midwestern regional department store Blain’s Farm and Fleet.

When we asked for an additional response, Milo sent us this amazing set of pictures below. Milo’s Palo Alto office’s are located at 165 University Avenue, in the same space as Google’s first office back in 1999. Look closely at the picture and you may even see a few of the famous faces from Google’s original team. The building itself is legendary in Silicon Valley and has also housed PayPal. Here’s a 2007 New York Times article detailing the building’s history and apparent lucky karma. The picture of the Google employees was given to Milo by one of its investors. 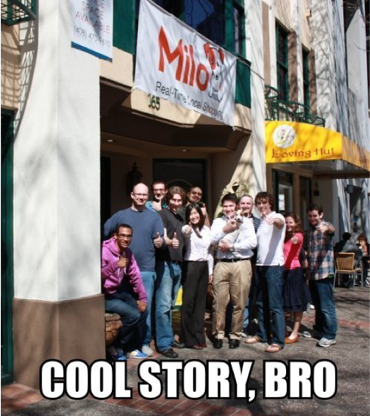 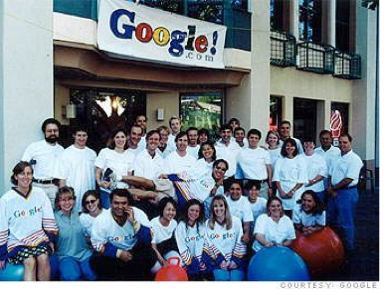 Milo CEO and co-founder Jack Abraham was quick to respond that they are not implying that Milo is the next Google, but just meant to inject some light-hearted humor into the situation. In all seriousness, Abraham said that Milo has a tremendous amount of respect for Google and its Product Search but aren’t scared of the search giant entering the market and actually welcomes the competition. Abraham and his team have been working for the past two years to scale their product and feel that their offering is more comprehensive than Google’s Blue Dot specials. While Milo is steadily expanding its merchants both regionally and nationally, the startup is also looking to partner with mom and pop shops in cities. Currently, Milo indexes 2 million products.

And Forrester reports that the “online research, offline buying” consumer market represents $917 billion in consumer spending, which is 30 percent of all U.S. retail sales. Online, e-commerce spending accounts for less than 5 percent of U.S. sales. With those numbers, it comes of no surprise that Google wants a piece of the pie. But perhaps there’s enough room for a number of players to monetize from this space.