Over the last six months, doubleTwist, the iTunes alternative that lets you manage your music, videos, and photos, has really been stepping up its game. In October the company integrated an Amazon-powered MP3 store, allowing users to download and sync their music directly with any of hundreds of compatible devices, much as they would with the iTunes/iPod combo. And today it’s adding a new feature that makes it an even more viable iTunes competitor: support for podcasts.

Co-founder Monique Farantzos says that doubleTwist has built and integrated a podcast search engine with 20 times as many podcasts as iTunes offers. Rankings are based on popularity (as opposed to a simple listing that would grow unmanageable with that much content). The new feature is launching on Windows now, with Mac support for podcasts coming next month.  Later this year, doubleTwist will offer an API allowing other applications to tap into the podcast search engine.  The company is also planning to launch a client for Android (which would presumably allow users to stream content) over the summer.

Farantzos says that doubleTwist is also going to start offering more cloud-based services. In May, users will be able to store the podcasts they’re subscribed to server-side, so they’ll be able to use the same subscriptions on their desktop and mobile clients without having to dock them together.

While it supports many devices, doubleTwist is becoming increasingly popular as an ‘iTunes for Android’. In January, it forged a partnership with T-Mobile, which promotes doubleTwist and has pre-installed it on some devices. Now, 53% of doubleTwist users are using it to sync with Android phones. The application also supports syncing with many other devices, including WebOS, BlackBerry, Sony PSP, and digital cameras. 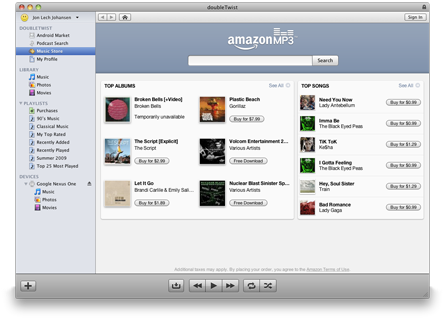 doubleTwist is still missing some of the functionality that iTunes has, like the ability to download TV shows and movies. But the podcast functionality will add some video content, and 1 in 5 users are using it to manage video content they already have.  And some people may even appreciate the added simplicity if they’re just interested in music. In any case, it probably isn’t worth holding your breath for doubleTwist to add movies and TV downloads any time soon — content owners are still set on wrapping that content in DRM.

Also see Songbird, another iTunes alternative (you can see our past coverage here).